It didn't go as planned, to say the least, but I'm trying to convince myself there wasn't really ever a plan. My goal was to finish. I did that.

END_OF_DOCUMENT_TOKEN_TO_BE_REPLACED

Reports from races throughout Northern California, including the Nike Women's Half Marathon, California International Marathon and the San Francisco Marathon. END_OF_DOCUMENT_TOKEN_TO_BE_REPLACED 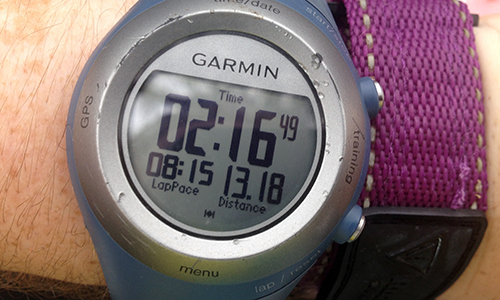 A few of my
favorite running items

Since I began running in Dec. 2009, I’ve developed a list of the things I absolutely love that make my runs more enjoyable. END_OF_DOCUMENT_TOKEN_TO_BE_REPLACED

When your race medals don’t even hit the wall anymore because your toddler loves to play with them. #blog #mylittlehumaniscrazy

Sixteen months ago I delivered a beautiful baby girl via emergency C-section after pre-eclampsia forced an induction at 37 weeks that didn't go as planned.

My world was turned upside down. All parents say that. Other cliches that were inevitably true:

"You'll never understand the love until she's in your arms."

"You will never be alone again."

END_OF_DOCUMENT_TOKEN_TO_BE_REPLACED

What inspires you to run? Answer to win a See Jane Run race entry

Last year, a huge chalk board at the See Jane Run San Francisco Bay race in Alameda said "I run for a reason ..."

The half marathoners and 5K runners went up and wrote about what inspires them to run. I was eight weeks postpartum at the point. It was my first run "back" since my daughter was born via C-section.

END_OF_DOCUMENT_TOKEN_TO_BE_REPLACED

I’ll admit to being a horrible blogger again, but for good reason. I’ve had a job application due for the full-time position on my campus and a funding application due for classroom/newsroom equipment for my students. On top of those things, I had curriculum working its way through the system.

The good news is almost all of that is coming to an end soon. I’m waiting for signatures on paperwork right now.

I ran my Valentine’s Day half marathon and did OK. It was the best performance since my daughter was born I’ve had. It’s not where I want to be, but it’s a start. The wear on my body also has me rethinking some upcoming races (specifically trying to fit a full marathon in come May, which doesn’t look probable now).

One thing I know for certain: I’ll be at the start line for the June 21 See Jane Run Half Marathon. As a race ambassador for a third year, I’m excited that this weekend the store is hosting local festivities.

I’m bummed, though, that my babysitting schedule is all out of whack this week and I’ll likely end up NOT being able to go out for a store run. (I’ve exhausted my goodwill babysitting for this week already.)

Fear not, though. You can join a great group of Janes in Northern California if you have time Saturday morning. The three See Jane Run locations – in Danville, Oakland and San Francisco – will have runs at 9 a.m. followed by an informational session about the race.

Instead, I’ve offered myself for questions from the “mom” group I belong to. Quite a few of our members are signed up to run. Some for the 5K and others for the half marathon.

We had a conference call a week ago about the race. One thing that came up was the post-race food. It looks like there will be some changes in that general area. I’ll have more on the race as I get more information and in April I’ll be giving away a free entry to the race.

So stay tune … and I promise when things at school die down, I’ll be regularly posting again.

I've run half marathons before.

But even so, I'm incredibly nervous about running a half marathon tomorrow.

This will be my 25th half marathon since 2011. I'm completely aware some people run more than that in a year. But this one is the first one I've had a complete training cycle for, a ramp up, a taper down, etc. since my daughter's birthday.

END_OF_DOCUMENT_TOKEN_TO_BE_REPLACED

Training for a half marathon, on a treadmill

I'm running a half marathon in three days, but you wouldn't know it by the number of times my Garmin has tracked runs lately.

Because that number would be zero.

But my miles logged are as impressive as I could hope for with a very active nearly 10-month old running my life lately. I could wake up very, very early to run. I could. But I've never been a morning runner.

END_OF_DOCUMENT_TOKEN_TO_BE_REPLACED

I'm not a huge fan of bikinis. I think I've owned quite a few tankinis. But a bikini? I doubt I'll ever have enough confidence to pull that off. Despite that, in early January I signed up for Bikini Body Mommy Challenge 3.0.

END_OF_DOCUMENT_TOKEN_TO_BE_REPLACED

Loving my body again: A tale of broken boobs

My daughter will be nine-months old on Thursday. When people meet her, there's generally a consensus about how happy she is, how much she smiles and how good of a disposition she has. I'm lucky that at this point in the mommy game, I'm rarely getting asked the question that I was so frequently at the beginning.

"That's complicated," was the standard and necessary response.

END_OF_DOCUMENT_TOKEN_TO_BE_REPLACED

After my daughter was born last April, I decided I wasn't going to turn this blog into a space about being a mom. People close to me asked the question throughout my pregnancy. I stayed firm and said that while my posts would include my adorable offspring, I wasn't going to fall into the trap.

This would not be a mommy blog.

The problem is that I had become a mom. The moment my daughter was handed to me the first time I fell head over heels in love with her.

END_OF_DOCUMENT_TOKEN_TO_BE_REPLACED

The long road back at the San Francisco 2nd Half

I told myself after I ran the Oakland Half Marathon in 2011 that once I finished I'd have at least one thing going for me: I would never have to run my first half marathon again.