Loving my body again: A tale of broken boobs 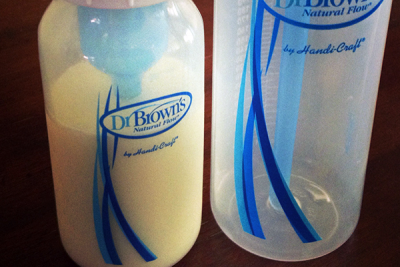 My daughter will be nine-months old on Thursday. When people meet her, there’s generally a consensus about how happy she is, how much she smiles and how good of a disposition she has. I’m lucky that at this point in the mommy game, I’m rarely getting asked the question that I was so frequently at the beginning.

“That’s complicated,” was the standard and necessary response.

“How can it be complicated?” was usually the retort.

The honest truth? I tried. I tried with every fiber of my being. I willed myself to get up when night was at its darkest. I spent early morning hours in my daughter’s nursery while she was sleeping soundly in her bassinet next to where I was supposed to be in bed. I wanted my breasts to be engorged when I woke up in the morning. I wanted the discomfort of knowing when I needed to feed my child.

And I got none of that. 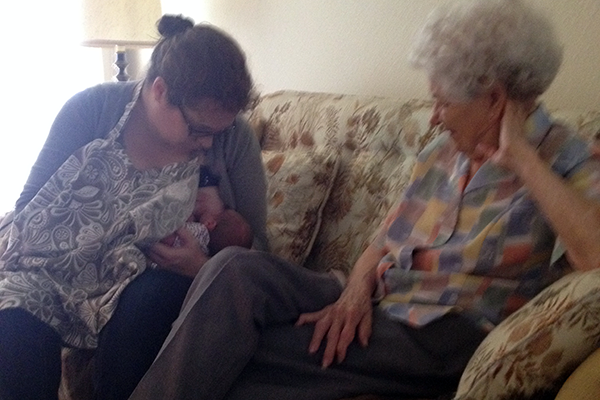 In fact, my daughter recoiled from me so much whenever I tried that I would cry in my bathroom with the door closed so my husband couldn’t hear me. I’d flush the toilet when he came in just to avoid the questions of what I was doing locked up behind a bathroom door I rarely close (because no one ever comes into our master bedroom but us).

In her birth story, I talked about how I felt my body failed me. I felt betrayed. I had spent years running my butt off to be fit enough to have a complication-free pregnancy. I ran and did yoga. I didn’t gain a ton of weight.

Then, at about 26 weeks, everything started to fall apart. My legs swelled. My body pressure began rising. By 32 weeks I was being monitored twice weekly.

The gut punch after I’d already spent time crying over all that? My daughter screaming at me whenever I tried to put her to my breast. 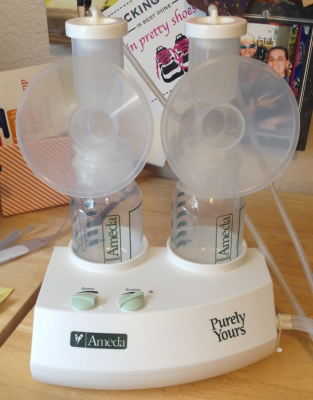 I pumped so often that for my first Mother’s Day, less than a month after Cecilia was born, my husband bought me one of those “hands free” pumping bras so I didn’t have to hold the pump to my chest for 30-plus minutes at a time.

At first it was six times a day. Then I got a solid flow going. Or what I thought was a solid flow. I dropped down to five times a day and still yielded the same amount.

“Stimulate your breasts” everyone kept advising. I spent so much damn time stimulating my breasts that by the end of the day, my breast pump should have bought me a drink. And dinner. Preferably something at a steak restaurant.

And yet? So very little came out.

The worse part was that it seemed very few women, other mothers included, could remotely understand what I was going through. Instead, they offered tips to how to increase my supply as if I hadn’t scoured the Internet for hours on end, at my wit’s end, looking for a solution.

“Have you tried drinking more water?” Yes. I’m a runner. I drink a ton of water.

“Did you make those lactation cookies I told you about?” No, but I bought some online and they didn’t work.

“Maybe a beer would help.” I hate beer. Next.

“Try wine.” Did that. It was delicious. But no change.

“You should get one of those breast shields that act like a nipple, they do wonders.” Have one. Tried it. She realized I was trying to fool her. She’s a smart baby.

“Fenugreek.” Yes. That too. Already been there, done that.

“You know, if you stopped running, you’d probably have more milk.”

Really? I mean, really? The running was at one point the only think keeping me from being a crying mess in my husband’s arms as I did a Kim Khardasian ugly cry about how my daughter hated my boobs. 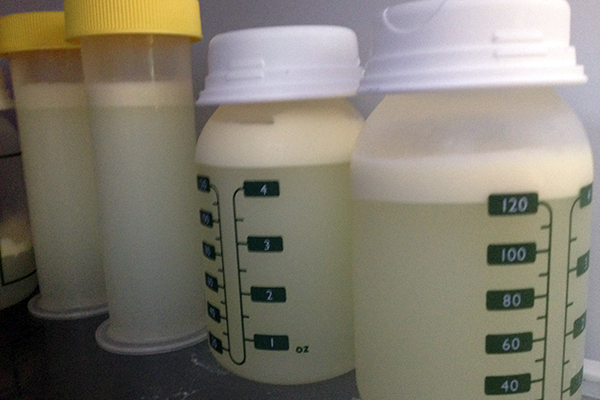 I’m a practical woman. I’ve spent a lot of time in the past few years learning to react based on evidence and logic rather than emotion. But even I knew what I had found myself in the middle of: the mommy war.

Because the mommy war is real. And while I’ve met some graciously supportive mothers who have let me cry on their shoulder or on the phone with them, I’ve also had first-hand experience with the women who tell me that my daughter will die of SIDS if I don’t breastfeed. Or how I can restart my breastfeeding now and “give it another go” because the formula will make her obese.

At four months, as I was gearing up to go back to teaching and advising, my milk started to dry up. My peak output was about six ounces a day. I had been supplementing since my daughter was born.

In a two week period, I went down to an ounce. Five pumping sessions a day and all I could get was an ounce. 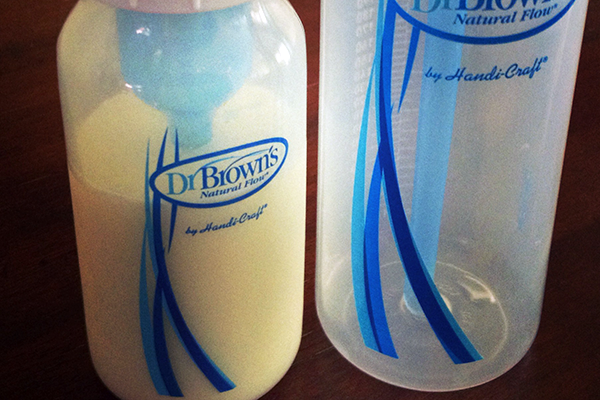 A lonely bottle, that took four days to fill, marked the point where I made the decision to stop hating my body. I’d had enough. My daughter was turning four months old. I wasn’t producing milk. I was going back to work. And I no longer wanted to be attached to a breast pump everywhere I went.

Call it selfish. Others have.

But I was done.

I couldn’t bear to look at myself in the mirror most days because of the vitriol being spewed at me for not breastfeeding from others — but mostly from myself.

There was a moment, as I was frustratingly finding clothes to wear my first day of teaching after 18 weeks at home in yoga pants and spandex where I looked up into my bedroom mirror, saw my reflection — crazy hair, red face, tears, baby throw up on my shirt — and said: “I don’t hate myself.”

Because despite my body failing me, I managed to bring an eight-pound baby into this world. I somehow didn’t mess her up with all the things I did wrong those first few weeks, including not realizing she wasn’t getting ANYTHING from my breasts. And she was happy. 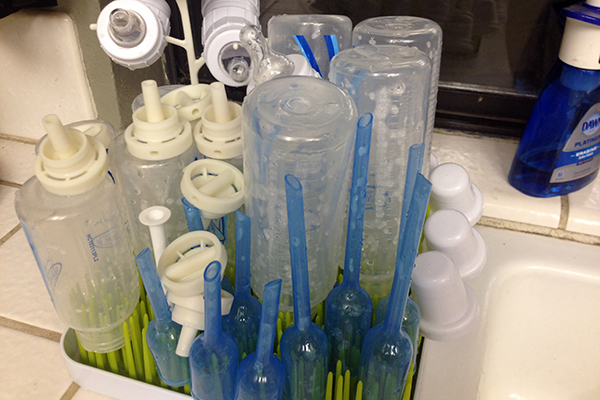 Cecilia was sleeping at the time. I put on my running clothes, inched her door shut and jumped on the treadmill. I ran the best two miles of my life that day. I was no longer finding reasons to not to love my body.

Cecilia’s pediatrician reaffirmed how wonderfully she was doing at her four-month check up. When I expressed frustration about pumping, she was one of the first medical professionals to tell me it was OK. She put her hand on my shoulder and said: “Mom, you tried. That’s all we can ask.” She smiled at me with a look of reassurance. I know she wasn’t just telling me what I wanted to hear. I’m thankful she said it in front of my husband, who had urged me to continue pumping, despite my low yield.

Nine months after her birth, I still have stomach hangover. I struggle to fit into my clothes. I’m constantly battling my diet as I try to find out what works for post-baby Tara. But I ran 10 miles this morning, albeit on the treadmill, and never once considered stopping because it was too hard even though I’m running faster than I was before I conceived. 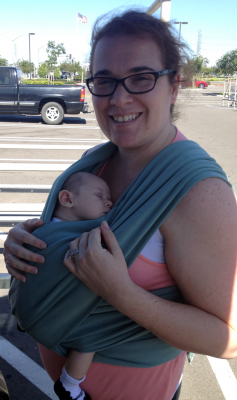 A few months ago, another mother I respect very much whose daughter is a few months  younger than Cecilia called me because she, too, was struggling with breastfeeding. I didn’t do what was done to me. I didn’t make suggestions for how to increase her milk supply. I didn’t ask a ton of questions in hopes of helping her “see the light” as one mother did to me.

I told her the words that I’d wish I’d heard at the beginning:

“Sometimes it doesn’t work. That’s OK. It doesn’t make you a bad mother. It makes you human. If it’s not working, stop. If it’s causing you undue stress, stop. It’s hard enough to be a first-time mother without hearing all of that.  If anyone tells you otherwise, tell them to mind their own business.”

Broken boobs are not the end of the world. My daughter’s health and happiness, and my own, are more important than being hooked up to a breast pump five times a day to squeeze a few ounces out.

And in order for me to truly be a good mother, I have to love myself as much as I love my little girl.