Ask Jane: Hydration as a habit 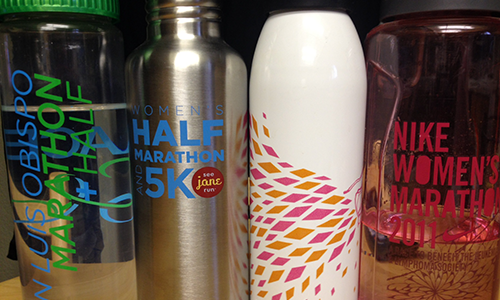 I’ll admit that I rotate three or four water bottles during the week, especially right before a race. It kind of drives my husband crazy because I leave them in different rooms. The San Luis Obispo Marathon bottle is usually in my home office or in my classroom. The Nike Women’s Half Marathon bottle spends most of its time in my bedroom. The Title Nine bottle, the white one, was rolling around the backseat of my Jeep until last week when I had to clean out my car.

The silver See Jane Run bottle, my latest addition, is now a constant in my kitchen.

On a typical day, all of them will start out full. By the end of the day, all are usually empty.

Hydration is THAT important. Especially now.

The sun is starting to feel a little brighter. The temperature is more than a bit warmer. Let’s face it, it’s hot. And the heat is being absorbed into the sidewalks and, even at 7 p.m., it still feels warm when I head out for an evening run.

That’s one of the reasons I asked the staff at See Jane Run in Oakland about topics pertaining to running in warmer weather, exactly what we’re facing right now in California as summer approaches.

One of the biggest concerns this time of year: Hydration.

And not just on race day.

“If you feel thirsty, you are already dehydrated,” said Kerina, the social media manager for See Jane Run and one of my Jane interviewees at the Oakland store on College Avenue. “If you are training for a race, you need to be hydrating nonstop.”

Most runners know the feeling: You’re doing fine, making your way out for a long-run. You feel like you’ve prepared sufficiently when, almost instantly, you feel as if you can’t get to the nearest water fountain soon enough.

As the sun becomes more intense, most people think THIS is the time of year to start thinking about drinking lots and lots of water. As a runner, it’s essential year round.

Kerina said that thirst you experience is your body’s way of telling you that you’re depleted.

In fact, the Mayo Clinic recommends that women drink nine cups of water a day.

Ginny, another Jane, points out that the magic hydration number, though, needs to be increased for those working out. A WebMD story backs that up, explaining athletes should be drinking around three cups of water in the hours before exercise, a cup to 10 ounces immediately before and then a cup every 15 minutes or so.

Seem like a lot? Not really considering how much water is expelled from our systems daily.

This is true even if you don’t consider yourself an “athlete.” Ginny said some women say “oh, I just run 10 miles a week” and feel like they aren’t really “runners.” Not true.

“You are an athlete, you are a runner – treat yourself like it,” said Ginny.

NOT YOUR AVERAGE H20

In many ways, drinking a ton of water doesn’t sound appealing. I know. I’ve been there. There’s that moment when you can’t drink anymore. NOT. ANOTHER. SIP. UGH.

Kerina has a recommendation for that sort of “over it” symptom.

Nuun tablets are a good way to add a little flavor. The brand has really taken off over the past year, especially with more than 10 flavors, including Cherry Limeade, Lemon Tea and Banana. 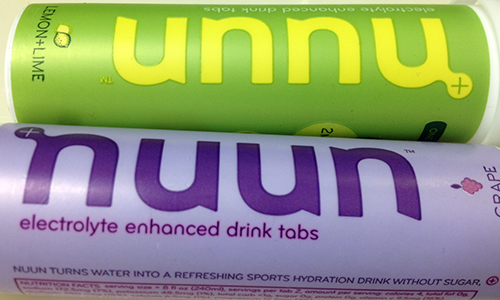 My favorites happen to be Lemon Lime and Grape. These tablets are portable and travel well.

Miranda, the third Jane I spoke with Oakland, recommended Nuun tablets to both add flavor, but also add crucial electrolytes back to the body. That’s important during training and on race day.

“Water is important, but you won’t feel good until you have those electrolytes in you,” she said.

AT THE START LINE

We all know the “nothing new on race day” mantra. Even beginning runners have heard it. Proper hydration is part of that plan.

Consider water bottles. I am consistent about running with my Amphipod 20-ounce water handheld.

It’s a little overwhelming when you walk into any running store and don’t know where to start. Kerina said it comes down to personal preference. Belts are popular. 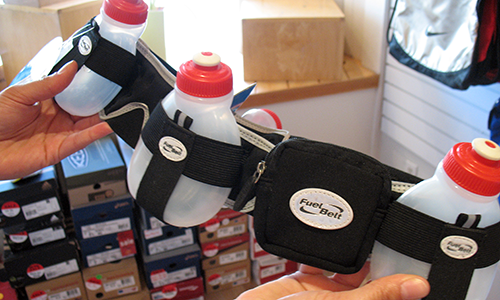 They offer a nice balance around the mid section and provide water or water/electrolyte mix in smaller doses. I know runners who prefer these over larger water bottles because they can moderate intake much better, i.e. every bottle per three or four miles.

I prefer holding a bottle. 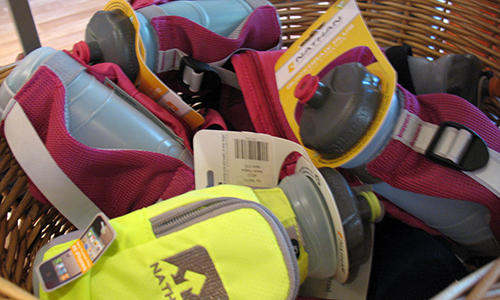 There are many, many choices in this area. I prefer one with a pocket to carry my “stuff.” That usually means my keys and a bunch of packets of Vanilla Bean Gu. Or some cash.

See Jane Run also has a “best of both worlds” kind of hydration system. It’s a belt with a larger water bottle. I actually ran with one of these when I started running distances over six miles. It’s nice because it holds more “stuff” and also has a bigger water bottle. 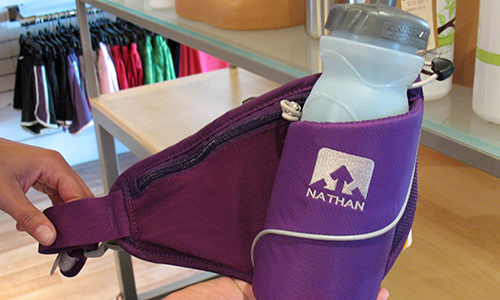 Some runners would rather not carry water. It’s important, then, to know where water stops are either along your daily running route or at a race. A typical running route doesn’t present many problems. A race brings surprises.

I ran a half marathon last year in deceivingly cool San Francisco weather. I carried my 20-ounce water bottle. But I was thirsty (likely from not hydrating well the days before, a rookie mistake even though I know better). By the time I was on the Golden Gate Bridge where there were no water stops, I was out of water and feeling faint.

Know where the water stops are, but be prepared if things don’t go as planned.

The bottom line is the hydration is incredibly important. So important that my questions for one blog post, about warm-weather running, turned into a series that included this as the kick-off point. The biggest recommendation from the crew at See Jane Run is to make hydration a part of your everyday life. Like all healthy changes (taking up running in the first place, included) it works better when it becomes a habit.

Disclaimer: I am not a medical professional. The views on this blog are merely suggestions. As always, consult a doctor before you start any new workout routine or if you are having issues with hydration.