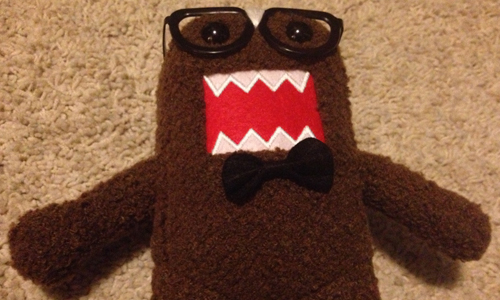 No. I didn’t run a marathon and forgot to tell on here. Though, if there was a marathon that offered a medal of Domo, I’d be all in. Like right now.

The marathon I’m running right now isn’t even one I have to lace up my Nikes for. It’s the marathon happening in my life.

If you could equate a lifetime to 26.2, I would be hitting “the wall” relatively early. Right now, I’m hitting it everyday.

Simple things are hard at first. Deciding when to wake up? Difficult. Getting out of bed? Tough. Getting in the car to drive? Scary. Trying to have some semblance of life before the panic attack? Seemingly impossible.

Five days after it happened, I realized I was different.

“Did I have a breakdown?” I asked my mom.

She responded in the affirmative.

A friend the other day referred to it as “the episode.” People ask me how I am. They don’t know that by the time they see me, I’ve usually had to overcome four or five moments of sheer terror before I can even get myself going in the morning.

I’m not going to lie, I’m not doing well. I thought, three weeks out, I’d be better. I thought the confidence in my voice would return. I thought I’d be cleared to return to work. I thought this would all be past me.

Yesterday marked the first time since “the episode” (sounds funny like that doesn’t it?), that I was able to talk about it without completely breaking down. Progress? Yes. Enough? No.

I got in my car on Monday to go to the store only to sit in it for 20 minutes while I figured out what, exactly, was making me so worried. Why was I so anxious?

I’m told I have to retrain my mind to get past the objections and the fear. I told my therapist that I’d been avoiding filling my gas tank up in my car. She asked why. Because I’d have to get a full tank. Then I’d have to wash the window. Then it would just be better to wash the whole car. And what if, at the gas station, I realized I needed something from the store? I’d have to go.

It sounds irrational as I type it. But I still don’t want to go get gas.

It took me six days to make a phone call necessary to my recovery. Six days. I would normally not have a problem picking up the phone.

A letter from work tells me I’m “required” to apply for disability. Fine. Doing the actual paperwork was a lesson in humility.

I couldn’t get through the little red boxes for days. And all I was doing was entering my name and other basic information.

What happened to me? Where did I go?

Today I’m angry about it. Today I’m upset that the people who should have noted a change in my behavior instead ignored it. Today I’m heartbroken because there were so many chances for someone to intervene.

I didn’t hide it. Not at all. My self-destruction was evident. I joked about my anxiety initially. It’s not so funny now. Not when it’s become paralyzing.

I was told to journal my thoughts. That part is easy. In written words, it flows. I feel more normal than I typically do. I’m able to reach a part of me that seems distant. But in person, I’m still clinging for familiarity. I can be in larger environments, because anonymous people don’t bother me.

But the thought of signing up for a local 10K Turkey Trot? I don’t even want to go there. I’ll see people I know. People who read this blog. People who want to ask how I’m doing. And I’ll shut down.

In Kindergarten I had a teacher who pin notes on my back so I’d remember to take it home to my parents. I’m tempted to pin a note to myself that says “leave me alone” and leave it at that.

I’m trying to grasp this in a way that will help me see through it, so I know there will eventually be an end to all of this. That’s where the marathon comes in. But this one is much worse than San Diego. This one doesn’t just rub your feet raw, it also hurts your lower back and breaks your will. This marathon is mean. And it knows it to.

So how do you attack a mean marathon? Training. Lots of training. Distance runs. Speed work.

It’s like running a race and powering through the water stops where they’ve run out of water, or where you can’t feel your toes anymore.

Tags: health, other
From: Other, The Long Run
← Gift idea for a runner: Mini first aid kit
A public service announcement on chafing →