A public service announcement on chafing

This is going to be a rather gross post. For that, I apologize in advance. But I think this sort of thing is important to address, especially with the number of winter races coming up.

This weekend, my mom and I ventured to Monterey for me to run the Big Sur Half Marathon on Monterey Bay. This was my second year doing so. And, for all my hiding in the portable toilet for 15 minutes and not being able to sleep too well the night before, I did really well. I knocked nine minutes off my time from last year, running a 2:28:27.

I also now know that, if I can pull myself together, I have a good chance of doing well at the California International Marathon in a couple weeks.

But that’s not what this post is about. I’ll get to weekend specifics and the race in the next couple days.

Specifically, how bad it can get really quick.

Behold, the grossness of chafing. 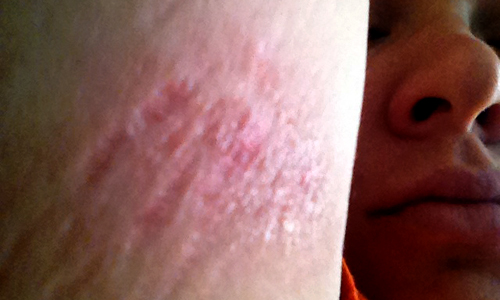 That’s why I buried the lede here. It’s pretty gross. And this isn’t exactly the best photo. But you can see how badly torn up my fat little arms are. I’ve mentioned before that my upper arms don’t ever seem to lose weight. So my “fat little arms” are always rubbing.

I started the run with a long-sleeve shirt on. But by the time I hit the underground tunnel taking runners from downtown Monterey en route to Pacific Grove, I was taking it off and wrapping it around my waist.

That meant that my arms were exposed.

I usually wear Lululemon Run:Swifty shirts when I run. This time, I wore my Big Sur Half Marathon short-sleeve tech shirt under my long-sleeve layer.

I didn’t notice the chub rub at first. As we got to the turn around at Asilomar State Beach, I wasn’t feeling any pain. It was about the time I hit the mile ten marker that my arms started hurting. I looked down and realized my arms were chafing. Bad.

And it kept getting worse.

That was the point, too, where I hit two water stops without medical tents with Vasoline. Usually there’s someone waving a cardboard around with it. I couldn’t find anyone.

My fat little under arms were burning. I took my Lululemon long-sleeve from around my waist and stuck it under my arms. I was doing anything I could to keep the sweaty skin from rubbing anymore against my shirt’s sleeve. This is a shirt I’ve worn on runs before, but never sweating as much as I did for this run.

I held the long-sleeve between both my arms as tight as I could and just kept running. Finally, I saw a guy with a panel of Vasoline. I grabbed a huge lob and threw it, literally, under both arms. I was completely unapologetic about it. It was gross. It hurt. And I did it to myself. 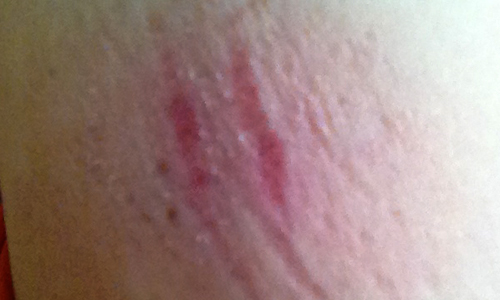 And yet, it was still bad. These blurry photos are two days later. My arms are just now feeling as if I could maybe wear a running shirt again. And I’ve used lots of cream, specifically Aquaphor, to help the wounds heal. It hurt to even put a shirt on after the run.

By the way those lines are stretch marks. They’ve been there since I lost the 30-plus pounds when I started running.

So I figured I’d write a more lighthearted post from some of the more serious, personal ones I’ve done lately. This is a public service announcement on chafing.

Buy Glide. Or something similar. Even during the winter months, when it seems as if you won’t necessarily be sweating as much, it’s best to apply and reapply the glide. Just do it.

And also, stick to what you know for race clothes. I wear different shirts on my short runs than on my long runs. I should have known better. I should have stuck with my tank top instead. But it wasn’t “something new” on race day, so I figured I’d be okay.

And that concludes my public service announcement.