The season for trimming down

January is the month when people take their resolutions far more seriously than they do any other month. I know. I’ve made and broken a lot of New Year’s resolutions in the first month of the year.

It’s also the year when big-box stores put all the workout equipment front and center. Plus, there are usually great deals to be had.

On Saturday, my husband and I visited our local Sears store. He needed to buy a nail gun so we could finish putting new baseboards in our bedroom, thereby finishing the epic master suite renovation of 2013. (We have nice vaulted ceilings which are great in general, but a pain to paint.) Our home is 20-years old and likely hasn’t been painted for the last 10, so the paint job was much needed.

My favorite part about Sears? The treadmills and workout stuff are right next to the tools.

It event comes with a workout DVD. I actually have a qualm with that. I’m spoiled maybe, but I’d rather not collect more DVDs in my house. I’m big on getting rid of clutter. I’m always throwing bags upon bags of stuff I consider garbage away. Can’t we get an Internet video link NordicTrack? Just saying. End rant.

I’ve been looking for a set of these to work my inner thighs and arms, places that often get neglected when I run.

So my husband bought a nail gun. I bought toning bands.

We completed two separate purchases, because I paid cash, and were talking the whole time my husband was in line before me.

“Do you know that man?” the associate asked me when I got up to the register.

The associate gave me a funny look, then looked at my husband, then at me. Then he asked if I wanted to use Thomas’ reward card.

“Do you know his phone number,” the associate asked.

I wanted to say: “No, we’ve only been married for nearly five years and together 11, but I don’t know his phone number. In fact, I wouldn’t know what he looked like if he hadn’t have come to the house we jointly own for the first time last night just to introduce himself.”

I didn’t. But that’s the sort of thing that goes through my head when people ask me questions like that.

The biggest deal I saw with all the NordicTrack-related fitness gear was for a 3-in-1 roller set. I paid $45 for my Grid roller. I paid another $25 for my Stick roller. Then I paid $25 for my Tiger Tail, which is my favorite of the three. Altogether they cost me nearly $100.

Then I saw this: 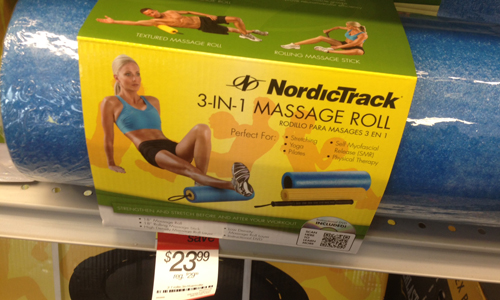 Sometimes I hate myself for over thinking things. Wow. I could have paid less than $30 for nearly all those things. They have this bad boy at Sears.com too. That set also includes an instructional DVD. (Or you can go to YouTube and search “foam roller” and find some iPad friendly tutorials.)

I actually checked out the rollers. They aren’t pool noodles. Add a little Duct Tape to those and you have yourself a not-so-fancy roller, but with not as much support as you’d probably get with a more expensive, not-homemade one.

Lots of stuff to help you trim down.

I have to be honest: I only visit that area because in the likely decline of my treadmill, which will happen sooner rather than later, I’m hoping I know what to pick up immediately when I need to buy a new one. That said, I’m hoping my $800 NordicTrack has a few more years of life left in it, especially since I maintenance it myself now, lube and all.

True story: I used $500 I won in a graduate-school journalism competition toward my treadmill. Most people would have bought a video camera or something, especially me since I love shooting video. Nope. I bought a treadmill.