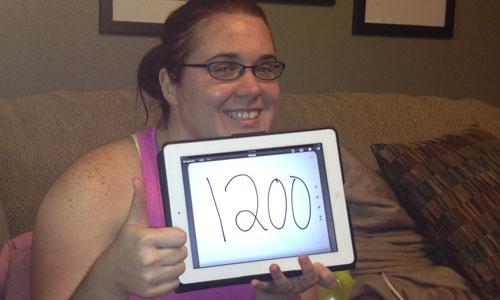 A lot has happened in the last week, including a huge milestone for my running. I set out this year to run 1,000 miles by Dec. 31. I had missed the number by 70 miles last year, when I had no real goal.

I reached the 1,000 mark in October, with an average of nearly 100 miles a month. And it’s not even because I’m torturing myself. My longest run lately has been seven miles. It went well, but I’m also not training for a half marathon until February, so this is more “downtime” for me. This month I’m at 75, hoping to reach 100 in the next week or so before New Year’s Eve.

This number is a huge milestone for me, for some pretty obvious reasons.

The first is all the problems with anxiety and depression I’ve had since October. I could have stopped running completely, just given up. I didn’t. I kept going because I had a goal with the marathon.

I think, if not for California International Marathon, I might have given up.

The second is that I feel like a stronger now.

I’ve read recommendations that say a runner shouldn’t take on a marathon in the first year of regular running. I went totally against that. I ran my first half marathon in March 2011. That same year I decided, in June, to run California International Marathon. And I did. It was my first.

I felt stronger this year, but the rain and wind threw me off balance pretty significantly.

Many things paved my way to 1,000. But my crediting resilience for getting me to 1,200. By the end of this week, I’ll likely have run 300 more miles than I did last year. I’m excited to get there too.

I mentioned that a lot of things happened this week, including me going back to work.

I’ll sum up the first two days with one word: tough.

It was really, really hard to be back. When I first walked in the building my heart beated fast, my body got tense and my head pounded a little. But I seemed to get through it, even when it was uncomfortable. There were many points when that was the case. I felt unsure. I felt threatened. Waves of paranoia hit me.

People keep telling me it will get better. But I came home crying on Friday night, frustrated and tired, feeling more ostracized than ever. I knew it would be hard. I didn’t know it would be this hard. I go back again tomorrow. Another day to try. Another day to challenge myself to be present, to pull my confidence together and get through it.

I don’t know a lot of things right now, but I’m sure of one — I’ll keep running this marathon-like race to get better.

Tags: 1200, breakdown, miles, miles run, news, other
From: Other
← Owning the breakdown, finding my ‘dawn’
The new plan →