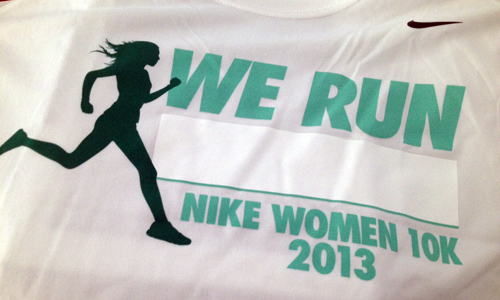 Here’s something I’m not used to: Getting a finishers shirt in the mail. But I found this beauty shoved in my incredibly small, unforgiving mailbox on Thursday.

It’s a pretty nice shirt too. It’s a long-sleeved Dri-Fit. It’s not one of the cotton Dri-Fit shirts I normally wear when running (which I rotate out with my Lululemon shirts), which I’m kind of relieved about. This one picks up the sweat really nicely (yes, I’ve already worn it on a run).

I have to admit, though, I was a little confused when I got it. I didn’t realize it had a place for me to write something on it.

I’ve only seen a few photos of it online so far, though, for inspiration of what to write on it.

Some people write where they ran. I think if I put “We Run Tracy” people might think that’s my name. So I was considering something that was on one of my other shirts. Maybe I could go with something like “We Run Empowered” or something?

The problem then is that I have to write it.

I once won a third-grade penmanship award for my very straight handwriting. If you see my handwriting now, you likely wouldn’t believe that was ever the case. My cursive is much, much worse.

I know part of it has everything to do with a formally strained tendon that hasn’t been the same since I injured it shooting video a couple years ago. So when I sign my signature, it doesn’t really look like the pre-injury signature. Plus I can’t sign my husband’s last name well. I guess that’s the difference between 24 years of practice and five years of practice.

So I’m likely going to never write something on this shirt and have that awkward white area just sitting there waiting for something.

On the plus side, it’s a nice shirt. It’s looser than I’d like at the bottom, but fits snugly at the top.

Plus, it has a pretty nice design on the back too.

It, obviously, looks like many of the other Nike shirts I had already in my running-clothes collection.

My friend Jennie made a comment about long-sleeved shirts the other day, mentioning that so few races these days give that option. San Francisco has for the last two years, though I know before that they had short-sleeve shirts. California International Marathon gives both options if you sign up early enough. I always pick the long-sleeve version.

The Oakland Half Marathon is one of the few races that does as well. And that’s what I’ll be doing this weekend.

I’m heading over tomorrow to pick up my race packet. I have a really, really low number this year, something in the 2,000 area, which I was surprised about. I’m planning on getting in and getting out quickly, unless I have a friend accompany me. My husband is supposed to work (or so I think, he told me earlier he switched his day off to Saturday, and then I reminded him that we’d only had a conversation about 10 times about Oakland being this weekend).

Oakland was supposed to be my “A” race this season. But with everything else happening (gallbladder removal, fractured arm, blah, blah, blah), I’m just going to happy to get going and finish. Plus, there’s this marathon in less than two weeks I’m really scared about at this point.

Crossing my fingers for a good race.

Tags: 10K, Dri-Fit, Nike, Nike Women's Virtual 10K, running
From: Other, Races, Training
← Luck of the Irish comes into play at 10K
Today’s the day when running cramps my style →