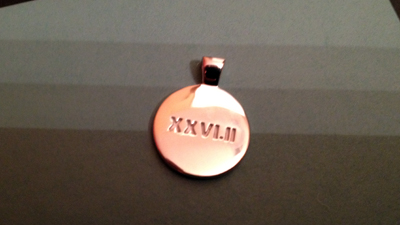 I took a step back from blogging this week for some personal reasons which I’ll probably (maybe) write about some other time. I was exhausted by Wednesday of last week and then I ended up taking Friday off of work because my body decided to rebel against a new medication I’m taking. My husband had to call in sick for me. That’s pretty lame.

Still, I had some good runs this past week totaling 21 miles, including an eight-mile treadmill run on Saturday. I’m thankful for that run because I didn’t think I was going to be able to run on Saturday morning. After my Thursday to Friday night was filled with nausea on every level I figured it would take me days to recover.

I was planning on another run today, but decided, while my body is adjusting to the new medications, I’ve take it easy for a couple days.

But this week has been eventful on the buying front, for which I feel a little bad. (Seriously? How much gear do I need?)

I invested in the fine piece of jewelry above with Roman numerals for 26.2. I wanted to buy it after my first marathon, but didn’t feel all that legit doing so. I figured since San Diego was such a suffer fest, I’d reward myself with it now. It costs $52 from Endure Jewelry Co. out of Clovis, Calif., which is a couple hours from me.

I have another necklace from Endure. It says “run.” I wear it all the time.

I opted only for the charm this time and am buying another necklace elsewhere because my last Endure necklace was way short. I even opted for the larger size and it was too short. Live and learn. I’m sure that once I get the necklace for the charm, this will quickly become one of my favorite items to wear.

Also new are two Lululemon Run: Swifty Tank Racerback shirts. I have one in the pale pink color on the model in the link. I also went for a wild color to be noticed when I’m running. 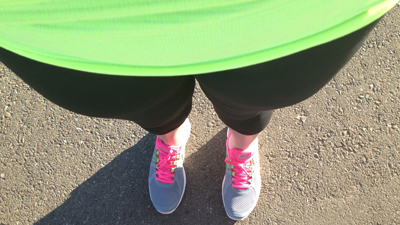 It’s Lululemon’s “ray” color. You can see if kind of matches with my new kicks (which I’m loving, by the way, thank you for larger toe boxes Nike).

I now own three tanks for running. I’m kind of not a big fan of tanks because I found that most the time they don’t work for me. These ones do. I ordered the “ray” color first and then followed up and ordered the pink one. I kind of wished Lululemon had other colors for it.

By the way, I’ve been following the Lululemon craziness over at the website/Facebook page about the Barbie doll in the company’s clothes. I understand the marketing behind it. As a Barbie collector, I even want a doll. I think people take these things too seriously. It’s a doll. In yoga clothes. So what?

I started back on Weight Watchers on Monday of last week.

I think I psychologically felt the need to bury it in a post with pretty things (Look necklace! Look bright top! Look fancy shoes!) because I don’t want to point out my weight.

I weighed in last week with a starting weight of 168.

This morning, I was at 164.5. My official weigh in day isn’t until Tuesday. I’m not sure if that’s water weight lost, but I feel much better. And I’m working on portions. (I weighed myself after lunch today and I was 166.)

I’m hoping if I admit it in the blog I’ll be more accountable for it. I’m liking PointsPlus better than the previous points system by far. I can nibble on fruits and vegetables and both are (mostly) 0 points. That’s a nice win.

I’ve eaten a lot more raspberries and blackberries in the past week. Tomorrow I have bananas and apples. Good stuff.

I’m hoping to run six to eight tomorrow too. And then do some speed work on Tuesday. I’m trying to ramp up a training plan that works for me as I track some running planning into the future. My next event is a six-hour endurance run. Then the San Francisco 1st Half Marathon on July 29.

My biggest hope is that the Weight Watchers will lead to some good weight loss by the endurance run, which will make me a happier run.