About that rain forecast for CIM

So rain is still on the forecast for Sunday’s California International Marathon. And it’s what everyone is talking about on Facebook on the race’s page. A lot of people have even asked if the race would be canceled due to the inclement weather.

That doesn’t surprise me, in light of the cancellation of the New York Marathon after Superstorm Sandy hit the east coast.

Except this is California.

And it’s rarely THAT BAD here.

In fact, one of the last times we experienced epic flooding in the Sacramento area was 1996. That’s when levees were breached. That’s when whole areas of homes were flooded, including some in areas down by my hometown of Stockton.

But it is never really that bad here. Sure, flooding is projected. But we sometimes define “flooding” as streets getting six inches of water. All the news stations today showed “flooding” just like that.

In any case, I’ve taken a couple days to prepare a plan.

A plan? If it’s not that serious, why would I have a plan?

I’m trying not to start the race completely drenched. I know that will be a fruitless effort once I get going, but I’m going to try to keep dry for a least a minute or two.

First off, the weather is projected to be about 60 degrees.

UPPER: So I’m actually planning on wearing a Lululemon Run:Swifty tank as my main race shirt. I’ll wear a long sleeve over it, but not something too heavy. I don’t want to wear something bulky, but I want to be warm. I’ll likely take a Nike wool pullover I have. The wool will keep me warm in the morning, but it’s light enough that I can tie it around my waist during the race. I’m not worried about it getting wet. I’ve run in the rain with it before.

I may, though, opt for just a regular Nike pullover. I’ll take a variety of clothes, just in case.

LOWER: I’m planning on wearing Lululemon Run: Bright at Night capris. I was considering pants, but because it won’t be too cold, I’d rather not have wet ankles. The capris will mean my ankles get wet, but with the wind (it’s supposed to be strong), I’m hoping I’ll also dry off a little too. 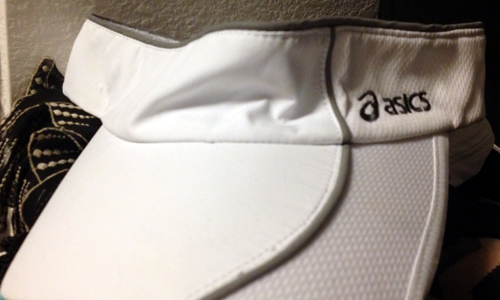 VISOR: I’ll wear my Asics visor to keep the rain out of my eyes. I’m opting to not wear a hat, if only because it will just get wet and my hair will get wet. I can handle running with wet hair, so why not just start out that way?

CONTACTS: I rarely, if ever, wear my contacts. I’m more annoyed with them than not most the time. And I’ve just become incredibly comfortable with glasses since I started wearing them in 2004. But my contacts come out every once in awhile, mostly for special occasions. Last year I ran with contacts for CIM. I’m doing it this year mainly because I’d rather not have rain all over my glasses. 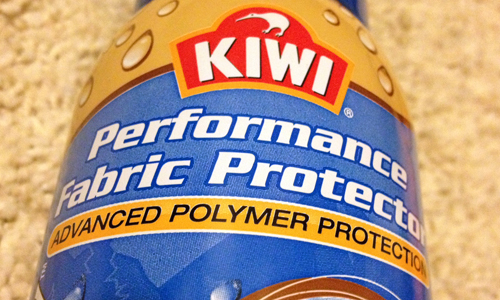 SHOES AND SOCKS: I’m applying the fabric protector above to my shoes and socks. It may not work. That’s fine. My hope is that I can get through at least some of the race with dry feet. If it’s the downpour it’s expected to be, I’ll be all wet at the end. I’m hoping that a comfortable pair of socks will mean I don’t have blisters.

TOES: I’m still having issues with my baby toes curling under the toe next to them. I’ve gone through three pairs of shoes and this is still a problem. I actually bought toe spacers because if I end up with blisters, it will be in this area. I used similar toe spacers for the Clarksburg Country Run a couple weeks ago.

These ones are thicker, but I have a blood blister on one of my toes I don’t want to aggravate.

CHAFING: I’m going to use Body Glide everywhere. I’m also taking a small container of it, purchased at an expo a while back, to carry in my capri pocket just in case I chafe along the way. I know there will be Vasoline along the course as well. 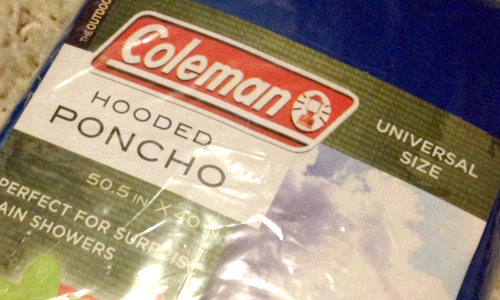 BEFORE RACE: And I bought a poncho. I grabbed one for Jennie too. I’m not planning on running the entire race with this, but I likely will run a couple miles if it’s really bad. Or I may just throw it to the side once the race starts. I’m hoping it keeps me dry before the race though, when we’re all standing waiting for the gun to fire.

I know that I am going to be a mess at the end of this. That’s inevitable. But I’m hoping taking some precautions beforehand, and at least planning, will set me on the right path on a rainy day.

I’ve never run a half marathon in rain let alone a marathon, so we’ll see how it goes. I’m trying not to be worried about beating last year’s time. If it happens, it happens.

A lot of people are saying they are just hoping to finish this year. I’m trying not to be too pessimistic about my chances, but I think it’s going to be a “wait and see” thing for me.

But I’m ready. Even with the 100 percent chance of rain.