The best kind of break

I’ve decided that I need to be more upset, at least for five seconds or so, about my arm being fractured.

So here’s my boo-hoo rant: Seriously? Do I need one more problem? Isn’t 2013 already screwed up enough? Isn’t my training cycle for the San Luis Obispo Marathon already damaged enough? Wasn’t it enough my gallbladder had to be removed eight days into the year? WHY? WHY IS THIS ALL HAPPENING? WHAT DOES IT MEAN? 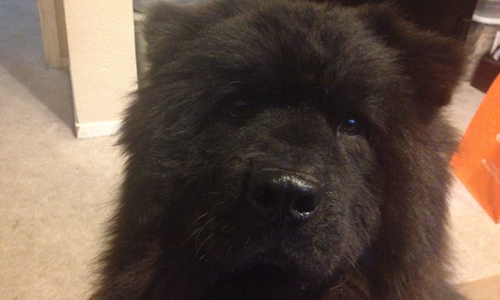 I don’t know about you, but I can’t be mad or annoyed when I see his little face. Actually, he’s not that little. He’s 70-pounds of dog that likes to plop down on top of me when he thinks I’ve slept in too long. He’s a good alarm clock that way. Lately he hangs with me in my home office when I’m coding websites.

When I get frustrated I sometimes say “ahhhhhhh!” really loud. He just kind of gives me this concerned look. Or this is his “I want your food” look. I’m not really sure. But if I offer him a Peep, he takes it. And he loves it.

That was his face when I got home from my trek to a nearby town for my appointment with an orthopedic specialist. Today, I got lucky, though, I got to see a sports medicine doctor.

Cue divine moment in medical center when the receptionist said: “You’ll need to go down to the sports medicine department, your doctor is based there.”

Why was that so exciting? Because I’d get to talk to someone who “gets it.” I had a feeling this would be fine.

An assistant pulls me into the inner sanctum of sports medicine and takes my blood pressure, which I’m happy to report is much lower than it was two days ago. I also weigh a pound less, good considering I started a very strict diet at the beginning of the week.

Same questions: Where does it hurt? How did you fall?

“I was running. I turned around to say something to my friend Jennie. I went down. Hard. I couldn’t hear out of my right ear for a couple minutes. Everything went black for a little while,” I said.

What I didn’t say, but wanted to: “Oh yeah, that was two weeks ago. I walked around like this for nearly two weeks before seeking medical treatment. I’m not that stupid usually. Even my students made fun of me for being that stupid. And my husband. My husband hasn’t let up on me for this bit of stupidity.”

In the room, she prepped a small table. My first thought was that they’d already decided I needed a cast. Panic took hold of me. I’m running a 10K tomorrow! I can’t have a cast! NOOOOOOOOO! 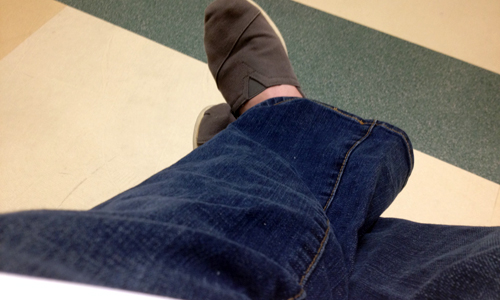 Shaking my legs back and forth off the table like I did when I was younger at the doctor’s office.

There was a photo of the doctor in on his racing bike, wearing a number. He gets it, I kept thinking to myself. It will be OK.

When he came in, I recounted what happen and how stupid I was for not coming in sooner. He took measurements by degree of my left arm’s mobility. He compared them to my right arm.

Let’s just say this: If my right arm was operating at A-grade proficiency, my left arm would be getting a D. Maybe a D+ at best. Stupid failing arm.

Then he shocked me by saying something to the effect of “if you were to fracture a bone, this would be the best kind to have.” Apparently it’s also one that is easily missed. He showed me the X-ray. I didn’t see anything broken really. Just a faint black area on one film. Then a chip on another.

That stupid chip is what’s causing me so much pain?

He would have recommended a sling for a week when it happened. Now? No sling. No wrapping. No compression. I was stunned. For real? I finally got a break? (God, I hate puns.) 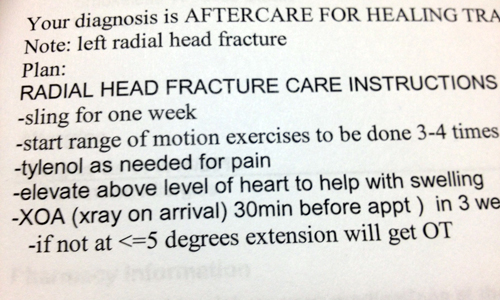 I have another appointment in three weeks where, as indicated above, I’ll get an X-ray on arrival and then proceed up to see the doctor. It’s still very much broken, but it’s one of those “it’s already healing” things too. That’s why it feels better and I can use it a lot more than I could a couple weeks ago.

When I threw the sling of agony in the backseat of my Jeep, I felt victorious. Then I tried to close my car door. And that hurt like hell.

Then I tried to open a store door while running errands. I probably shouldn’t do that either. There’s no sling or wrap, but the bone is still not 100 percent. It’s probably not even 50-percent fine.

I called my husband who said I was the “incredible healing woman” and then muttered something about being glad I was using our new health insurance so soon. The joke in our house is that I’m falling apart (as indicated by so many things lately), and he should trade me in for a new model. I told him we should have had one of those Tom Cruise/Katie Holmes agreements when we got married nearly five years ago. Something that said after five years he could exchange me if I started falling apart. I would have added on a clause saying the exchange would be tall, skinny and blonde. Because I care. I think I should have come with a warranty.

The best part about all of this? I didn’t have to prompt the doctor to ask if I could keep running. I had told him early in the appointment I was training for the SLO marathon.

He just told me I could.

“I was kind of doing that anyway,” I said.

He wasn’t even surprised. He didn’t turn away from writing my aftercare instructions.