‘Tell me where it hurts’

Remember when I was absolutely certain that I didn’t have a broken arm? It wasn’t swollen. It was starting to feel better. The advice nurse told me that it didn’t sound broken. To be fair, she also told me to follow up with a actual doctor’s appointment, but I didn’t bother for another week.

That appointment was today.

I had to twist my arm and basically show everyone “where it hurt” like I was a five years old and had a stomachache that wouldn’t go away. But in actuality, I kind of had to tell them a lot since it was so far after the fact.

I left the office thinking that it was exactly what everyone thought it was: a trauma-induced muscle strain.

At 6 p.m. my doctor told me and said it looked like there was a fracture. 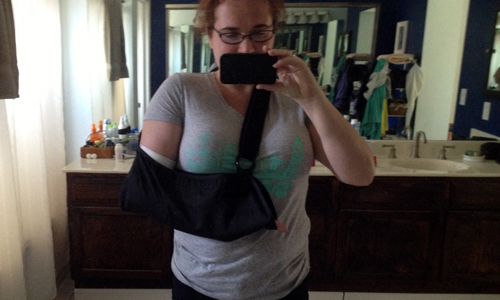 There’s supposedly a hairline fracture in there somewhere in my radial bone. I’m being referred to an orthopedic doctor in Stockton at some point in the next few days. (See what happens when I can’t use one of my arms? I have crazy hair. Just absolutely a mess crazy hair. This isn’t even as bad as it was two weeks ago when all of this first happened. My husband had to do my hair. I’ll let you imagine just what that looked like. It was bad.)

So I need to apply ice, wrap it for compression and wear a sling. Then the orthopedic doctor can decide what, if anything, we can do to fix me.

For the record, I’m tired of needing to be fixed. I’m still tired of doctors. Today’s visit was with my third primary-care physician in eight months. I’m not feeling as anxious about this insurance change as I thought I would (we switched to Kaiser coverage with my husband at the beginning of February after four-plus years with a PPO), but I’m still annoyed.

I’m thinking I’m not as apprehensive because I’ve approached the last three months of my life with a “rip off the Band-Aid” quick rule. Make a break. Get away. Be done. Move on. And it’s working, outside of the fact I keep hurting myself and ending up in doctor’s offices where I have to explain everything that’s happened to me since October.

I feel like I’m in a group therapy session: “Hi, my name is Tara and I fell apart in October to the point that I was having nightmares about my coworkers at my full-time job killing me at my desk. I also cried and hyperventilated every time I thought of walking into that place of employment. In January they fired me via email, then let me resign, after I tried to go back to work but apparently became a problem. I’d devoted more than a decade to that company. And yet, when it all went down, I was just glad I didn’t have to walk through those doors again. I’m better now. My life is fuller now. I run a lot more now. My husband says I’m happier. The whole episode made my mom cry. I never wanted to make my mom cry. Questions?”

I think that’s the first time I put that out on my blog. Again, rip the Band-Aid quickly.

I know what you’re thinking: “OH MY GOD, SHE WENT CRAZY AND NOW SHE SAYS SHE’S FINE! CRAZY PEOPLE SAY THAT!”

In actuality, I’ve been off my anxiety medication since the moment I left that job. I haven’t had any issues with depression since then either. It’s taking a lot for me to write that, especially since there’s such a stigma around mental illness.

Those who were supporting me feel as if it was limited to one particular place, over a period of time. If they knew then what they know now, a concerted effort would have been made to get me out of the situation I was in a lot sooner. I’m grateful for what I learned in the process of losing myself, then finding my way back, but it also made me very aware of the limited resources for dealing with these sorts of problems in my area.

Everybody tells you to “talk to someone.” No one tells you where to go next. It’s not like having a broken arm. You can’t splint it and send a patient on their way.

For months instead of telling someone where it hurt, I was telling someone (an incredibly good therapist) about all the stupid little things that scared me. For two weeks, I couldn’t even put gas in my car because I was so overwhelmed by the motions involved in it. I didn’t know who I was or what I wanted anymore. The nightmares were the worst. They manifested as terrors, feeling so real I was afraid to go to bed. When I went back to work the people who were in those nightmares were literally sitting right on top of me.

“This will make you a stronger person,” my running buddy and good friend Jennie once said to me. “Things like this happen for a reason.”

It has. It’s also made me very aware of the signs when someone is falling apart at the seams. I was falling apart. For months. There were people who saw me everyday, my family included, who could have helped. No one knew what to do. I needed an intervention. Instead, I had a breakdown.

I won’t even start on the fact that after four years and multiple emergency room visits it was only this year my medical providers caught my very sick, very angry gallbladder and removed it.

After all that, can you imagine how I feel about doctor’s offices?

I got in. I had an X-ray. I went back to see the doctor. She prescribed me some extra-strength Ibuprofen. I filled out paperwork to transfer my oodles of medical records from as of late. Then I went home…only to get the call as I was getting dressed to run, all full of myself for NOT having a broken arm and being stupid enough to walk around with it for nearly two weeks.

That’s karma folks. It bites you right in the butt all the time.

I wanted to be upset, but I’m kind of just rolling with it.

Today, when the doctor’s assistant brought me back she told he she had to put me in the “vibrating room.” I looked at her suspiciously. But she was serious. The room sits above the engine room on the first floor. I would have shot video of everything vibrating, all the medical tools and what not, but I kept thinking the doctor would come in.

I did get this gem: 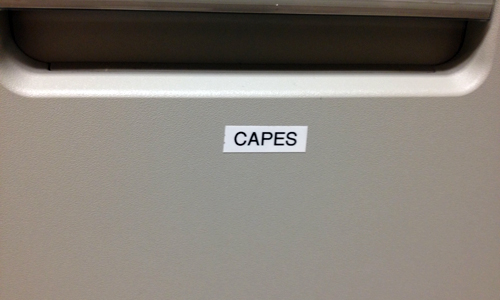 I imagined how many people thought of being a superhero when they saw this drawer. I laughed, out loud, in the vibrating room while thinking about it.

I didn’t know my arm was broken when I left, but I still felt as if everything in the world was set right again after a good visit with the doctor. Even after getting the call and email from my new primary-care physician, I realized it could be a hell of a lot worse.

I’m rejoicing today because, unlike some things, a broken arm can so easily be fixed.