I keep surprising myself 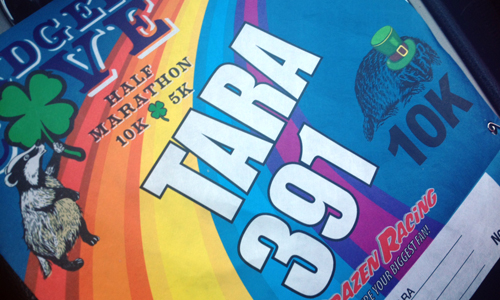 This morning I woke up, calm, ready to head to Livermore and do my first official 10K in a full year. I didn’t believe it either when I realized, today, that the last time I ran a 10K was this same race, a year ago.

I’ve a couple shorter distances in that time, but I knew this was the first in a year when I opened the pocket on the water bottle and saw that I had the map from last’s year Badger Cove run tucked into it. I only use the bottle, a small Lululemon for Amphipod one, for 10Ks.

Last year I ran Badger Cover, with all it’s crazy elevation changes and switch backs in 1:26:41. I wasn’t too upset about my time for that one because I knew it would be tough. I also remember the nagging side pain I got during the greatest climb that caused me to keel over on the side of the trail and feel like I was dying.

We know now that was the gallbladder. This year, it’s gone.

And I’m better than I thought I could ever be, even with tired legs and a bit of a dehydration/potassium deficiency as of late. That’s why my calves have been hurting me so much lately. Three bottles of water yesterday and a potassium supplement and this morning I was good to go.

Today, I finished the Badger Cove 10K in 1:18:13, according to the results posted before I left.

When I left my house this morning, my arm felt more stiff than it had last night. I popped an Ibuprofen, for lack of not being able to find a Tylenol, and was out the door. It didn’t take the edge off. At the start line, a guy brushed by my left arm and made me cringe. I’m considering writing “I have a fractured arm” on my head.

But I started running. And I forgot about my arm. At least for most of the race.

I don’t know who this version of me is and what business she has earning two course PRs in less than a month, but something has lit a fire inside me. And I like it.