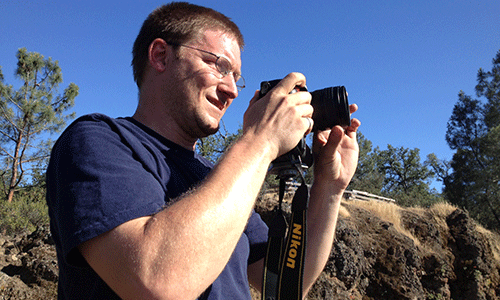 I’m going to start this blog post with the truest statement I can: My husband is a saint.

I know a lot of women gush about how amazing and supportive their husbands are, but I know everyday how lucky I am. When I met Thomas 11+ years ago I didn’t know that we’d be sharing our lives together this far down the line. I never envisioned us being at each other’s college graduations. Or getting married. Or buying our first house. Or having three dogs.

I didn’t know. I was only 17, though, not even a high school graduate. He was 20 and still trying to figure out what he wanted to do with his life. He was studying to be a photographer. I think both of us are glad he eventually chose engineering. (Because really, two unemployed journalists in a house? Bad news.)

We don’t have an easy relationship. But relationships are hard. They take work. Both of us aren’t afraid of working hard.

I’m hotheaded even on my best days. I have a sharp tongue that gives me an upper-hand in verbal confrontations, but often leaves my opponent feeling lousy. I’m stubborn as all hell. My voice, even when I’m not mad, has a way of moving past “indoor conversation” volume. And I can hold a grudge forever without it bothering me too much.

I’m the one who calls our insurance company when they over bill. I’m the one who negotiated with the car dealer last fall when we purchased our Jeep. I’m assertive, much to the dismay of some.

So when I emotionally “broke” last fall, my husband was left picking up the pieces for a woman he’d never seen fall apart so badly in more than a decade together. It scared him. Probably more than anything else in his life or our relationship had ever scared him. He lost the essence of who I was. He lost me.

Now, he’s not a timid type or anything to that nature. He’s a man who handles large-scale projects for a living. He’s a man who really “sees the forest through the trees” in every aspect of what he does. He’s ridiculously intelligent, which he would say about me in return, but in a much different way. I’m a creative type, I can visualize projects, pages, design and code, putting it all together in my head. He’s analytical. He sees numbers and measurements. He’s a “measure four times, then cut” kind of guy.

This may, we’ll be married for five years.

What it means to us? We’ve made it this far in a loving, amazing relationship. We’re doing a good job! Good on us for keeping it together!

What it means to outsiders? We should have had children four years ago.

I’m not even kidding.

I’ve been asked, in recent years, whether there was “something wrong” with me. I’ve been confronted, point blank, by someone inquiring if I was barren.

“All that running you do can’t be good for getting pregnant,” someone once told me.

Even better was when someone told me they could recommend a good specialist in “that area” of concern.

When we got a new dog this year, I nearly died when I got this text message: “So you’re going to keep getting dogs instead of having children?”

My reply to all these things isn’t exactly holding my mouth: 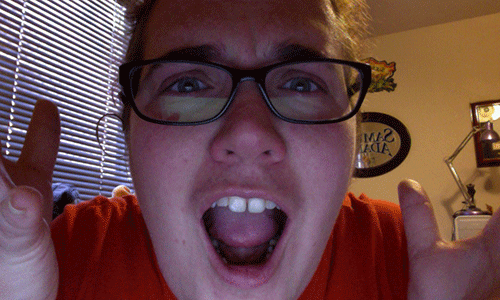 Instead, I’ve become accustom to using a phrase I heard from a once-friend: “Ladies and gentleman, please get out of my uterus!”

My grandmother, who I love dearly, even pulled a guilt trip on me last summer when I turned 28. She told me that women my age have two or three children by now. “I’d like to see your children before I die,” she implored. Thanks grandma. THAT’S exactly what I needed.

When I called her up saying I had “good news” recently, she responded: “You’re finally pregnant!”

No grandma. No. I had signed up for another marathon. She wasn’t impressed.

My husband once told me he wanted children by the time he turned 30. He was also 20. A lot changes in ten years.

And you know what? We’re talking about it now. In detail. We bought a four-bedroom, three-bath house in 2010 with the intention of “growing” into it. But not with 10 dogs. With children. (Want people to REALLY start nagging you again about children? Buy a house that’s too big for you.)

But the conversation started last year, when I still had a full-time job that kept me away from home 60+ hours a week. Then the part-time job that sometimes ate up 30 hours a week. I had tests done last year before my gynecologist skipped town (seriously, she was just gone one week). Soon, everything else got in the way.

This month, we started going through the motions again. That means no more birth control. Period tracking through an iPhone app (ahhh, modern technology and sorry for the TMI, not really sorry though). It also means vitamins and supplements.

We’re not jumping in full boar quite yet.

With my history of diabetes I’m actually not really “allowed” to try until at least three months worth of blood sugar tests. And I’m still hanging onto some weight it’s recommended I drop. I know not everyone gets pregnant immediately. But my new gynecologist has recommended a timeline that includes waiting to really “start trying” in the fall. As in September or October. Not tomorrow. Or Sunday. Or our fifth wedding anniversary, etc.

(Side note: I’m a bridesmaid in a wedding this December and I love the bride so much that I don’t want to be the ridiculously pregnant bridesmaid, so this timeline works out just fine. I go back for blood sugar tests after a couple months of diet watching through the summer.)

Which is where the part about my husband being a saint comes back into play.

When everything that happened to me at my previous job reached crescendo and less than 24 hours later I was in a hospital recovery room after having my gallbladder removed, my husband noted the lack of people who even bothered to come see me. People he thought were my friends didn’t even send text messages. People who’d I worked with for years. (To be fair, I would have been more upset if I wasn’t so incredibly drugged up.)

One person came to see me. One person who truly loved me. She’s one of my best friends.

Thomas would have done anything to make me better. Anything.

He made the decision for me. For my health. For my sanity.

There was no discussion about money or responsibility or bills. He assured me it would be fine. He was heartbroken when I tried to get my surgeon to clear me as soon as possible so I could send a letter of resignation (the surgeon wouldn’t, he made me wait two weeks before he’d clear me if only because he thought the surgery and painkillers were impacting my decision making: “See how you feel in two weeks, then let’s talk…”).

The Tuesday after my surgery, I received the email informing that I would “not be returned to my position.” My mild-mannered, gentle husband, who isn’t prone to hyperbole, flipped his shit (there’s no lack of a better statement here, that’s what happened) even though we knew I wouldn’t be going back. I didn’t need to be mad. He was mad for me. I’ve never seen him so angry in all the years we’ve been together.

Because to me, it felt like the weight of the world was released from my shoulders. To him, it was the ultimate insult after more than a decade of work.

So you can imagine, at this point, that we don’t come to our discussions lightly about children. We’ve rarely come to any decision together lightly, even five years in to a marriage we hope will last us until we’re old and gray.

One of my favorite photos of us, from our first dance at our May 2008 wedding.

But I know something now I didn’t know six months ago when the world I knew changed forever: I know that when he said “for better or worse” he didn’t mean it as just a simple recitation.

We’ve been through a lot of “worse” in the past year, from my crying everyday at after work home for months to the initial prescription for Zoloft to my leave from work to what happened in January. All the time, he’s been there. My biggest cheerleader. My best friend. The smiling face I see at the end of every run I do. The person who celebrates my PRs just as much as he celebrates my finishing bad races. The man who made the biggest decision of my life in a moment I couldn’t.

“We’re waiting for the right time,” people say when others ask about having children. It’s a stock reply. It’s the avoidance reply. It’s the polite way of saying “I don’t want to talk to you about that” or “stop asking me that question.”

The reason I’m front loading my race season? The reason I’m running two marathons in the spring/summer and don’t have one scheduled for the fall/winter yet? Because now, we’ve decided together, that it’s getting so close to being the “right time.”