Finding my stride and consistency 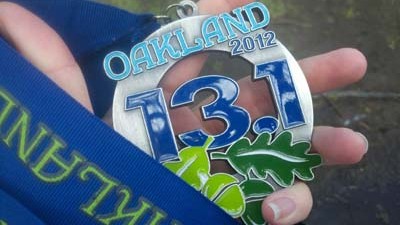 I’ve written a lot about my lack of consistency lately. I start a run and then trail off. I get weaker as I go through. I can’t maintain a solid pace. My mile numbers are all over the place.

I’m struggling as a runner. I know it. I have a lot of reasons for it. Two jobs don’t help. Lack of a good night’s sleep isn’t either. I’m stressed. It’s impacting my running on every level.

I had no business running the Pasadena Rock ‘n’ Roll Half Marathon last month. None. At. All.

Since the Pasadena fiasco, I’ve tried to gain a little more perspective on my running. I’ve limited my caloric intake too. I’ve made some changes. It’s not a complete answer, but so far I think I’m making progress.

So my goal for the Oakland Half Marathon today was to strive for consistency.

And I wanted to do better than last year. (Even though it’s a new course.)

I’m proud to say I accomplished both.

The Oakland Half Marathon starts at 9:15 a.m. which is a little late in the running world. But it meant we could wake up at a decent hour and head to the new start location, Snow Park, which had a fairly good turnout of people.

I scoped out the finish line.

Not much to see there. The 5K, which until this year was held on Saturday night, happened before the start of the half marathon.

The portable toilet stock was pretty good too for a race with 4,000 people. I’m not kidding, there was a whole stock of portable toilets. I’m kind of sad I didn’t get a photo of it. There were also some location on a side street which was just as nice, especially when we found people were using the other ones more. A morning positive! No bathroom lines!

We also wandered around a little bit. The merchandise tent looked better at the expo. People were buying stuff. I did all that the day before at the expo. 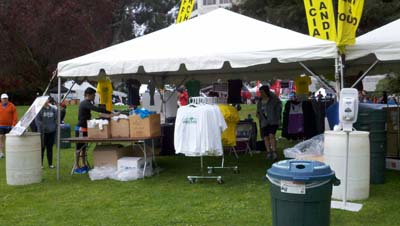 We stopped at the bathrooms. And then we heard the announcement telling the half marathon runners to line up. I made my way into the 11 minute corral. I set my Garmin for an 11:30 average pace. It beeps when I’m not meeting that. And, I’m happy to say, for the first time ever, I met that pace overall for the race.

We crossed the starting mats after three minutes.

I struggled for the first four miles. I think it was combination of fatigue (this has been a rough week at work) and hunger. I had eaten so long before that I was a little hungry at the start. 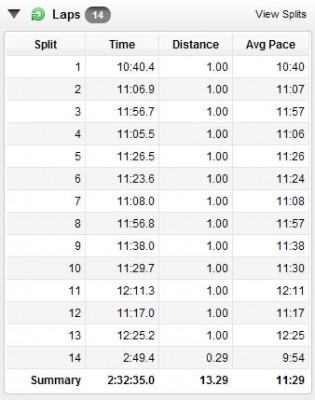 Mile 3 was a real struggle. That’s when I decided enough was enough. I needed a Gu. So I downed a Vanilla Bean one. That’s what propelled me through mile 4. You can see my struggle at the end. I let what I had going slip a little bit, otherwise I probably would have finished at 2:30.

My husband, though, was standing waiting for me at around mile 13.

I nodded back. He knows my average time on these things. And he knew, then, that this was a better run for me.

Why was it a better run? I listened to my body. When my heart started pounding, I slowed down. When I needed to walk, I walked. Then I picked up the pace and ran my heart out. I ran my heart out the entire race.

When I wanted to stop. I kept going. I just kept at it.

And I looked better than after my finish last year as well. 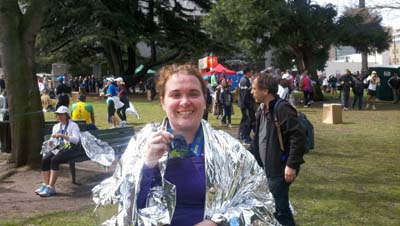 I did sit down. Because I was tired and, as you can see, red in the face. I have a slight sunburn. The move from Frank Ogawa Plaza in downtown Oakland to Snow Park was a good one. There was more space. It was closer to a nice view of Lake Merritt. People got to lounge around. 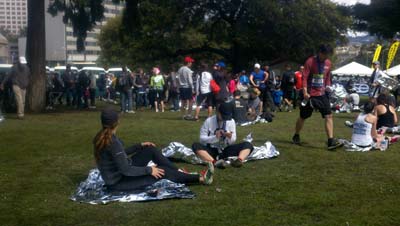 Yes, I take pictures of random people lounging around because I refuse to pull out my camera and take photos while I’m running. I’m not that kind of blogger.

It was Sam’s first time running the Oakland Half. I think this may become her race too. It’s already mine. It’s the only one I knew last year I was 100 percent sure I’d come back to. I hella love Oakland. And this half marathon. And maybe someday, I’ll run the full, giant hill and all.

That said, the last .1 mile of this half was all uphill. That burned. I was so tired at the end.

But I did it. I found my stride. I kept hitting it. I stayed consistent. I slowed when I needed to. And I kept going.

Last year, I had beer tickets at the end I didn’t use. This year, the Barefoot Wine booth was mixing up mimosas. It was close to noon, but yes, I wanted a mimosa in a small cup. 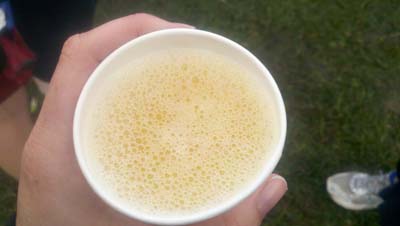 I got Thomas one too. I had two tickets after all.

Then we ventured back to Livermore, after a really urgent bathroom stop at a shady bathroom off the freeway in Oakland. We ate and drank at First Street Alehouse. Finally it was back home. Into the bath tub and then into bed. I was tired. My alarm went off at 5:20 a.m. I decided not to try to go back to sleep. 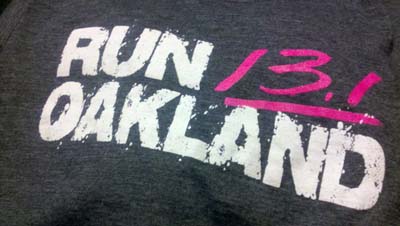 Check out my second expo shirt. I decided on a whim to buy it. I love it because it looks a little more hardcore than my other two shirts. It also was one of the only dark gray shirts at the expo.

Plus, this is on the backside. 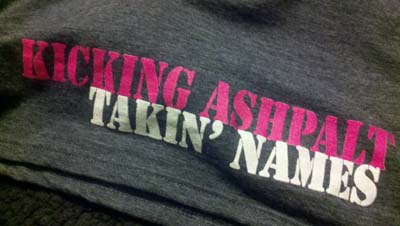 That’s exactly what I did today. Am I happy? Yes. Today was a good day. My run was a solid one. I’m proud of what I accomplished out there.

Can I do better? Always.

I’m going to keep working on it. As always.

Tags: 13.1, 2012, half marathon, Oakland Half Marathon, Oakland Running Festival
From: Races, Running buddies, The Long Run
← A sort of runniversary
37 miles and then the letdown →