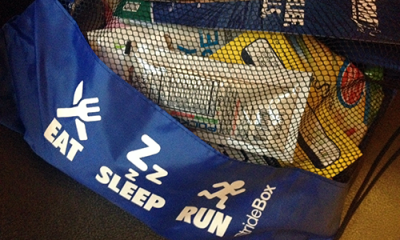 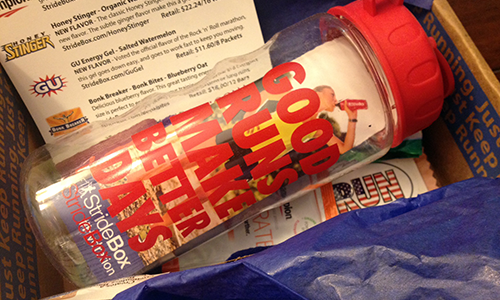 I’ve had a StrideBox monthly subscription since last August. That’s when I received my first, exciting both. Since then, I got charged $15 for the box of goodies to come to my mailbox at the beginning of every month. My loot from my July box, which I received late last week, is above.

Last week, I went into the payment module and cancelled my August box and all future boxes.

StrideBox, you’re great, but it’s time we break up.

It’s not that I want to try other services or don’t believe in the value of what was sent. It’s that I picked the wrong 12-month period to be a subscriber. I don’t think I need to explain, but I will.

I received my first StrideBox the same month we found out we were expecting Cecilia.

My running went down tremendously my first trimester of pregnany. I only had “morning sickness” that involved throwing up twice. I felt horrible, generally all day, the rest of the fist 14 weeks or so. I ran so little that not even my stash of favorite Vanilla Bean Gu got used.

So I wasn’t up to trying out new products.

I can’t recall what exactly was in that first StrideBox, but I know I actually tried to use most of the contents. I ate the energy-type bars, which I normally do, but I gave away most of the other stuff, especially stuff which caffeine, which I was avoiding.

The problem is, I kept doing that as the months went on. When my friends stopped taking all the stuff, I ended up with a surplus of StrideBox goodies. A good problem to have? Not necessarily.

I feel bad that for $15 a month, I basically started a collection of running “stuff” that I wasn’t using because I wasn’t running much of anywhere.

When my energy can back during the second trimester and I started running again, though not far, I was still very conscious about what was going in my body. StrideBox never sent me anything I thought would harm the baby. That’s not it at all. I just didn’t want to experiment as I would have likely done if I wasn’t pregnant.

So I tried some things here and there, but generally things started ending up in a nifty shoe bag StrideBox included in one of my orders. 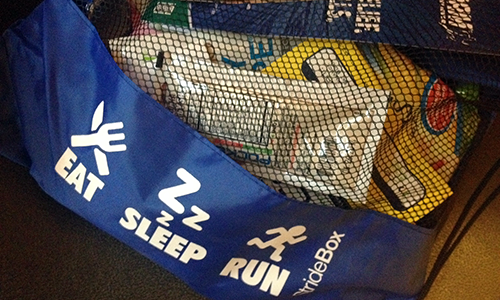 I considered cancelling the subscription in January when I realized, with all the pregnancy complications, that my running time would likely be more limited in the following months.

Then I, essentially, forgot about it.

Every month when I got a box, I’d stack it on top of the previous month’s box.

I had the February, March and April boxes all stacked together when the May box came after baby girl was born. When she was napping in one of those first two weeks after my C-section, I opened them all. I then asked friends if they wanted specific things. I put some away to give to people I knew would benefit from them.

Basically I ended up only using and appreciating 10 percent of the stuff I’d received in the past year.

The rest is still waiting for me. 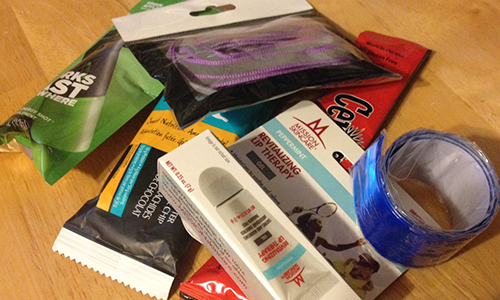 That’s only a fraction of what I need to get through.

StrideBox sends a mix of really useful and not so useful stuff, depending on the month. (That’s a personal critique. What is useful to me may not be useful to another person and vice versa.) I have arm protectors for the sun from June. I had a running belt from a previous month that I just gave to one of my running buddies.

So when I received my July box and I saw that I received a nifty little water bottle and a bunch of hydration items, which I knew as very similar to last July’s StrideBox, I knew my run had ended.

It was time to cancel, mainly because I had so much stuff that hadn’t been used in he past year.

The $15 a month wasn’t the issue at all, though that does by me two 50 packs of the diaper’s Cecilia is currently wearing. Parent priorities I guess.

I was always impressed with the content of the boxes, but with pregnancy and my slow-going comeback, my happy days of receiving a StrideBox in the mail every month are now over.

It really is me StrideBox. I love this month’s box. I love the cool items that I have got to try. I love that I discovered some new things though you. I’m just not into you as much as I thought I’d be.

Let’s not make it awkward around mutual friends, OK?

Tags: gear, mail, monthly subscription, runner mail, StrideBox
From: Gear, Training
← When a good run changes everything
What I missed most about running →