Pay the price for a porta-potty? 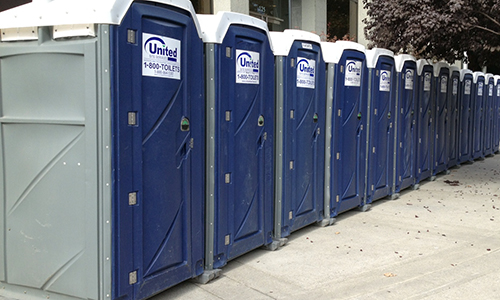 If you’ve been a runner long enough, you’ve learned to love the portable toilets that get set out en masse on race day.

If you’re like me, the relationship was strained at first. You hemmed and hawed over it. You waited for the real bathrooms, the ones where the toilets flush and there is real plumbing, before you would even try a “blue bucket of stench.”

But then you missed a start time. No big deal if there was chip timing. Until it was a big deal and you were literally the last person to start the race.

So you likely conceded to the plastic throne. You didn’t get too comfortable. You hovered. (Seriously, what I’m saying here isn’t anywhere near TMI, we’ve all done this before).

Finally, you realized all of that dancing around was stupid. You gave in. You broke down and just handled your business. Now you aren’t afraid of it. You even have no qualms about getting in and taking awhile.

You’ve entered into a relationship with the portable toilet. Even if it’s only one that’s comfortable on race day.

Running does funny things to your psyche. It makes something once so incredibly gross into a must-have essential, especially if you get the sudden urge to go all of the sudden at mile 15 in a marathon.

At the San Luis Obispo Marathon in early April, I literally had a moment where I was asking whatever divine force was guiding me to just let the little slider on the door for one of the two upcoming portable toilets be green.

“Please, please, please!” I said to myself as I ran up to the aid station near the turnaround at the farthest point out in the course. When I realized it was open, I jumped in more quickly than I can describe.

Now, I’ve done some bonding in toilet lines. Last year at Rock ‘n’ Roll San Diego me and my running buddy Sam literally waited for 45 minutes for the pleasure (or not?) of using one of the hundreds of moveable Johns lined up near the corrals. With something near 25,000 people running the race, those lines seemed to go on forever.

Lines have a way of increasing my anxiety and triggering rapid heart rate, sweaty palms and general freak out in me. I hate waiting. My last panic attack was at a doctor’s office where all they had to do was check my blood pressure. Needless to say, after 45 minutes when someone finally came out (after every patient around me, including people who’d come after me had left), I was trying to suppress the sheer terror eating me alive. Anxiety is fun, folks.

So when I received an email from the Competitor Group a couple weeks ago announcing an “upgraded” race package that included reserved parking, private restrooms, private gear check and a post-race brunch, I’ll admit I was tempted. 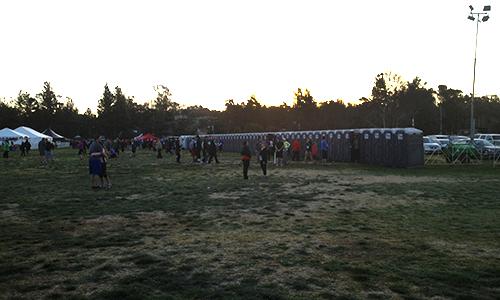 Call me crazy, but there’s something incredibly reassuring about “private restrooms” at the start.

I’d honestly rather not wait through the lines and deal with the mad rush. In fact, one of the reasons I’ve done so well at recent races is that I’ve had a string of good luck in the portable toilet area.

At Pasadena, there were plenty of toilets. Sam and I basically had never-used stalls the morning of. At Oakland, there’s always enough toilets flanking the side of the start corral. I think that’s because no one has quite figured out they are all right there just yet, let’s keep it that way Oakland. In San Luis Obispo, my early marathon start meant that all the half marathoners would be rushing to the toilets when I was starting mile three of my 26.2 mile run.

My next race is the Mermaid Sirena 18. Last year, NO ONE used the portable toilets in the small 18-miler field. I’m told later on there were lines for the half, but not for the longer distance. I’m looking forward to that again.

Portland will be my first larger-scale race since CIM (which is known for it’s long, twisting line of commodes at the start). After that, I’m doing See Jane Run in Alameda. The bathroom lines were long there in 2011, but also moved incredibly fast.

I kind of want the “private bathrooms.” I don’t want to worry about missing the start, or freaking out about waiting in line, especially in an area I’ve never been before. I don’t want to chance it. 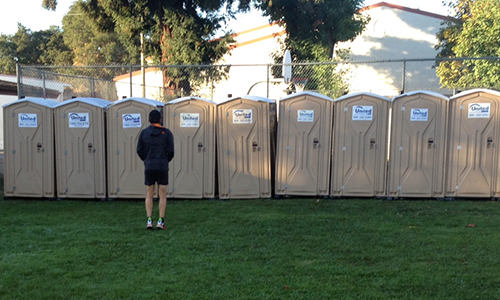 All these images? I, apparently, like to take photos of portable toilets and store them in perpetuity on my iPhone. The one immediately above is one of my favorites. One guy, nine choices. Do you know how often that happens at a race? Not very.

The price is what’s getting me, though. If Sam and I were planning to park, it would be one thing. We are doing public transportation instead from the airport to the expo to the hotel, which is less than a mile from the race start (another reason I wonder if I really need to buy special bathroom arrangements).

I’ve paid $20 for buffet brunches. I’ll likely use the bag check, since we’re coming from California and won’t go back to the hotel until all the festivities are done. But I’m also never really that hungry until about an hour after I finish a race.

So I keep questioning whether it’s worth it. I told my husband he could “gift” it to me for my birthday (the day after Portland). He didn’t seem convinced.In fact, he was pretty sure this race, much like it’s sister race in Pasadena (second photo), would have ample enough bathrooms at the start-line to make my little porta-potty appreciating heart content.

We’ll see. Until then, I’m still flirting (is that appropriate for a blog post about bathrooms?) with the idea of “upgrading” my race/bathroom experience.

Tags: bathroom breaks, pay, portable toilet, race upgrade, waiting in line
From: Gear, Races
← What we learn from the races that don’t go as planned
A not-so-subtle reminder →