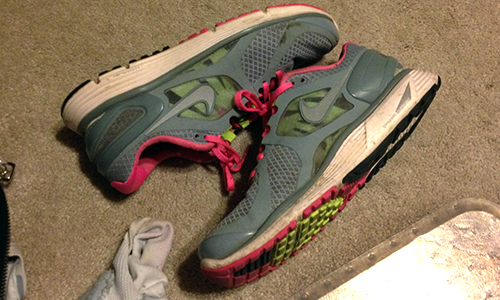 I haven’t really talked about my broken arm since the doctor gave me an “all clear” weeks ago. The mobility is far better than it was. It feels, mostly, normal. In fact, it really doesn’t bother me most the time.

Then I get a not-so-subtle reminder that it’s not quite at full operating capacity.

It usually comes when I’m in the middle of a cross-training activity. It starts as a dull pain at the site of the fracture. It’s not really noticeable at first. Then there’s a feeling of faint pressure. It’s followed by an all-at-once feeling that something is tearing the bone apart from the inside.

I can’t even do a 30-minute Jillian Michaels workout video with my friend Sam without saying “nope, can’t do this one” when we get to a move that would involve my left elbow.

I knew this would be the case.

The doctor didn’t promise me a miracle healing or even guarantee that I’d be back to my normal, push-up able self within a month. He said it would take time. He also advised me not to push as much pressure on it as I would my right arm.

So when Michaels instructs Sam and I go into a cobra position (or whatever it is, I don’t know, that 30-minutes kicks my butt), I shouldn’t be getting as much into it as I am. But I tend to push things like this a little far.

I think my arm is better. The truth is, it’s not.

In fact, the doctor told me to watch out when I run even more so because the likelihood is that if I fall on that same spot again, which I’d likely do because my luck is that great, I could completely fracture my radial head all over again. 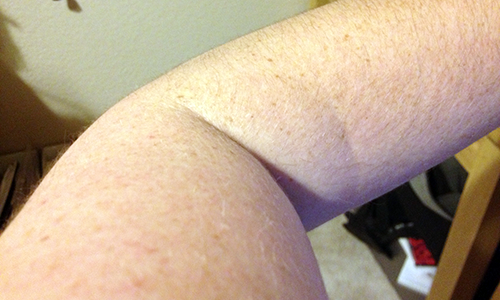 Doesn’t it look all healed up and unsuspecting? The pressure in that stupid little bone is ridiculously painful. I’ve never experienced “pressure” pain before. When it gets really bad, I turned to my “breakthrough-only” Ibuprofen. That’s pretty bad.

Even better, apparently I haven’t learned my lesson from all of the doctor visits, the week of a sling and the inability to move my arm completely for more than a month.

As Jennie and I were finishing up our six-mile run today, we were back into the neighborhood area where we run in front of houses. About four miles of our run twist down tree-lined paths by my house. The neighborhoods are basically at the beginning and end of the run as we make our way back to my house.

“I try to avoid these since you fell,” she said to me, gesturing down at a lip of a driveway.

Of course, I turned around. And looked down. As I was running.

Basically, I did all of the things I did when I fell in March. I didn’t fall tonight. But it made me realize a couple things: 1) I didn’t even realize that I had fallen over a lip of a driveway, but now that I think about it, yeah, that’s what happen. 2) I really should start paying more attention to the sidewalk while I’m running.