Cheetahs in the dark and other night running perils

I make no apologies for running at night. It’s often the only time I can carve out a chunk of time to go on a run. It’s soothing in many ways, with the hum of wind coming over the Altamont hills near my home. It’s cooler than during the day.

But I’ll be the first to admit, it’s kind of scary.

Especially when you see a cheetah. 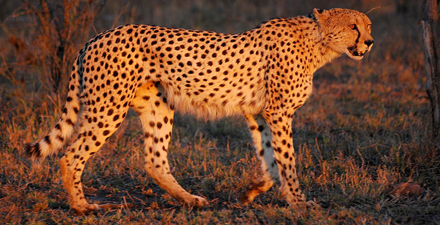 Well. Not really. That cheetah comes from Wikimedia Commons. Not Mountain House.

A couple months ago someone reported seeing a Mountain Lion where I run. Turned out to be a house cat. Yes, a house cat.

But the problem with running at night is that the mind can play tricks on your eyes. Even with a headlamp.

That happened to me and my running buddy Jennie recently. We’re already hyper focused on our surroundings. We literally turn around when we think we hear something behind us. We speed up in areas we’ve seen dogs jumping up to eye level at six-foot brick fences (seriously, a huge jumping dog).

We run through areas of darkness quickly, just to get to a brighter area.

And sometimes, we see things.

Once, on an early morning 20-mile run Jennie and I saw a fox. It was before there were houses in a specific area out in Mountain House. Instead, there were just frames. We hid, temporarily, in the world’s worst smelling portable toilets. That’s saying a lot about the smell too. I’ve experienced some pretty bad ones in my time as a runner.

On the recent cheetah encounter run, we had joked about seeing wolves now that it’s darker when we run. On the backside of the community, there’s a farm where we often hear wildlife noises. So a wolf? Possible.

So on that specific run, we were already psyching ourselves out a little when I turned a corner and saw bright eyes.

What the hell is that?

Jennie, about 50-feet behind me, is coming closer.

“Cheetah!” I yell out, half kidding.

The look on her face was priceless. She was petrified.

She laughed it off after I told her it was just a cat. A cat that ran and hid behind a bush as soon as we came around a corner. (Don’t ask me why I didn’t try to save it. I have dogs. And ducks. I’m not a big fan of cats in general. I would completely ignore all cats if I could.) 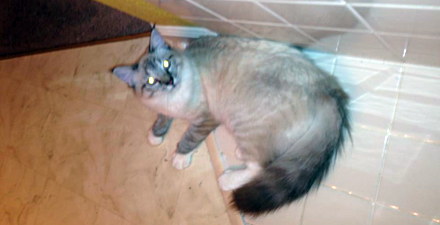 A cat like the one above can turn into a monster on a night run. I’m not even kidding. That specific cat above belongs to my student Haley. Haley recently had her world turned upside down with more than her share of loses, including her faithful companion Peaches, a cat that was like a sister to her.

I’m glad Haley got a new cat today. I’m more glad that, I believe, she adopted a stray. She was really excited about it. And it made me realized I needed to write this blog post. (Rest in peace, Peaches.)

So a cat as innocent looking as Haley’s becomes a crazy beast ready to chase us. Except it isn’t.

Once you see something like that, you let your guard down a little bit. Whew. That passed. Right.

Jennie and I laughed it off and rounded a corner heading into our last mile. About 20-feet after the little store we sometimes stop at we again saw eyes. Bigger eyes. On a bigger animal.

And we freaked out. In an unexpected way.

Because it was dark. 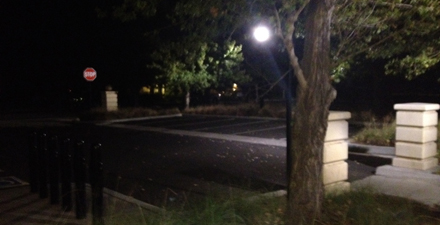 Jennie and I did a quick back peddle and ran back toward the store. Jennie ran faster than I’d ever seen her run on any training run. We looked back when we got to a safe place, in front of the store, and realized the dog, large as it was, actually  was with a person. On a leash.

But for 10 seconds, that dog was scary to us. And neither or us saw the owner, even with two headlamps.

I know not to run from dogs. I have Chow Chows, often considered violent animals (I call my dog Cuddles sometimes even though his name is Beau, that should say something). I was raised around dogs.

That doesn’t make it any less scary when you see an animal, staring you down on a sidewalk in the dark. A dog can become a monster. And a cat that’s likely more afraid of you, becomes a cheetah.

Or maybe I’m the only one this happens to in the dark.