A second chance, a second try, another marathon 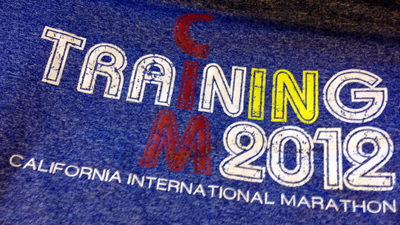 I hate it when bloggers make signing up for races a big deal. There’s a bit of the “I-just-signed-up-for-a-race-and-have-to-make-a-big-deal-out-of-it” moments when you come to a blog and the title of the post is “an announcement.”

So this is not an announcement. Not even close. It’s a mere statement of fact.

I signed up to run the California International Marathon on Dec. 2.

A second year of it. The 30th anniversary. Another marathon to try to bring down my time. I failed miserably in San Diego, despite months and months of extra training.

I “accidentally” ran a marathon at the Brazen six-hour endurance run in early July. But it wasn’t based on time and with the heat, I struggled at the end.

CIM presents a perfect opportunity to run a net-downhill course and revisit the route that, let’s face it, I don’t remember much of after mile 18. I’m hoping to remember it all this year. I’m also hoping to run better, both in how I feel and in how fast I run. So I signed up. I’m excited, but also nervous. I’m lining up races until then, especially since I’ll be training for the Rock ‘n’ Roll San Jose Half Marathon and the Nike Women’s Half, both in October.

I also, because I’m crazy, signed up for a half marathon the weekend after the San Francisco 1st Half Marathon. The Brazen Summer Breeze race is “flat and fast.” And I did it because I’m taking the week off of work. What a better way to take a vacation, right?

And so the training begins…