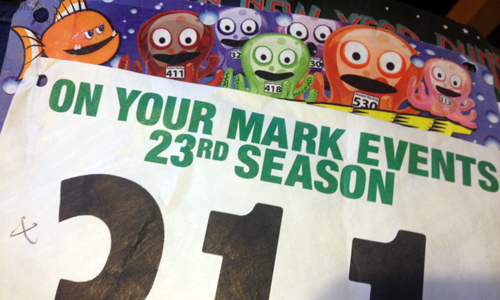 Last fall, in the middle of everything that went south in my life, one of my friends lost most of her home to a fire. It started with a laptop charger. The resulting damage is so much that she’s been forced out of her home for probably as long as a year. She lost nearly everything in the fire.

The little that was salvageable was whatever doesn’t reek of charred remains. We were talking the other day and she mentioned her race mementos: medals and shirts included.

Then she prompted me: Imagine, if everything was suddenly gone. She knows of my vast collection of race bibs adorning my home office walls, right next to my medals and my college and graduate school degrees.

I’d like to think we have protection for that sort of thing, at least to some degree. In 2008, my husband and I purchased a safe after our then rental home was broken into. It happened less than 10 days before Christmas. Our dead-bolt locks were kicked in, as was part of our fence. My dog Sky and I came home to massive footprints on our kicked-in doors, not knowing if someone was in the house.

Because I’m ballsy and a little stupid, I walked in with my husband’s ice ax prepared to greet the intruder.

I called the police.

They told me not to go in. I did anyway. (Again, ballsy and stupid.)

I found all of my jewelry gone. And two bottles of malt liquor. And some cheese. The presents, all wrapped, were still intact. Gone was a backpack, our video camera and every piece of jewelry I’d collected in my adult life.

I was devastated by one piece in particular: my antique engagement ring from my grandmother.

Long story short: Our insurance settled with us for nearly $5,000 in goods. But my high school class ring, numerous necklaces given to me as gifts and my first set of pearls my mom bought me were all gone.

So we bought the safe. And two more dogs. (A couple years ago, burglars were casing houses in my town by knocking on doors. If they heard a dog bark, they’d go on to the next house.)

It gives me solace, but very little when I think about the sense of loss and violation that I felt after our items were taken.

Which brings me to something as simple as a race bib. 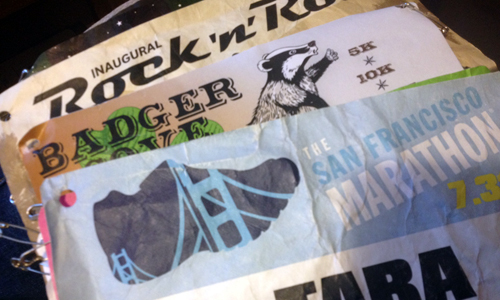 I have them all on a wall in my office. Yesterday, I removed nearly half of them and placed them in a folder for safekeeping. And literally safekeeping. My intention is to put them in our fireproof safe.

It’s made me start to thinking about other memorabilia I have from running (and everything else I consider irreplaceable in my home) and how I wouldn’t be able to replace any of those items.

So I’m trying to figure out what to do with some of these items, specially ones I consider incredibly dear. My first marathon medal? I can’t replace that. Some of my favorite running shirts? Very few race organizers have extras years after it happens. And how would you go about replacing items from races all at once? That seems impossible.

I once saw a runner ask Big Sur International Marathon officials on the organization’s Facebook page if they had any extra medals because one was damages. BSIM is incredibly good about getting back to people. And race officials did, saying they had extras and they’d send one along. But I know other organizations give them away. California International Marathon donates the previous year’s medals to children who participate in a charity run the next year. One race I did ran out of the medal, meaning the organizers likely didn’t order all that many extras the second time around.

A race bib is probably the least of my worries if something like this happens, right?

But bibs are one of those things that I’d likely look back on and say: “Wow, I wish I still had that.” 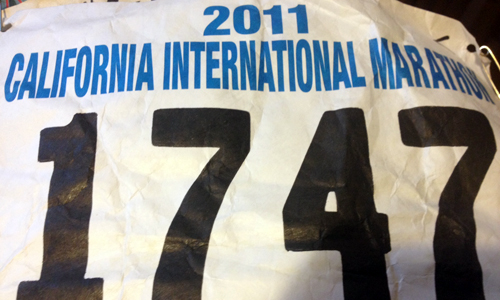 I don’t want to lose any of my mementos from that race. It was a defining experience for me.

So I wonder what to do next with items like this, as opposed to just putting them in a fireproof safe. Is there something more? Should I scour Pinterest and find of what crafty people would do with race bibs and medals?

The ideas I’m found doesn’t include protecting items like this against disasters. Most just show you how to frame or display them, not really how to preserve something so prized.

Tags: collection, race bib, race bibs, running
From: Disappointments, Other, Races
← The view from my 10-miler
Running sucks, especially when you fall →