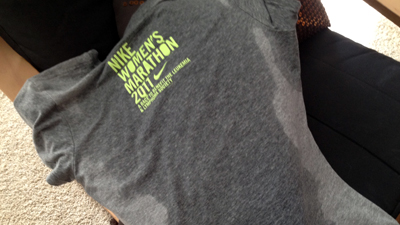 I once heard that one in every four women sweat more profusely than the others. I’ve always been one of “those” women. I sweat pretty easily. I’ll start shooting video on a relatively nice day and within 20 minutes beads of sweat will be rolling down my back. This is probably too much information, but it’s true.

In nearly every race photo, I look like a sweat factory.

The photo above is my shirt from today’s run. (No, I didn’t run the marathon last year, only the half, but nearly ALL the apparel for the Nike event is “marathon” related. I only ran five miles too.

Yesterday I had dreams of relaxing and even going wine tasting with my husband. He mentioned it last week. Last night he sent me a text saying his family was having lunch for his nephew today. I didn’t go.

I can count pretty high up on the things I haven’t gone to lately. Ask my parents. Ask my grandmothers. They haven’t seen me in what has been months. Why? I’m tired. And I stay home when I get the chance because every single day Monday through Friday I’m working nearly 12 hours between my two jobs.

What’s that you say? I did this to myself. Yes. And I should be thankful to even have one job let alone two? I am, believe me I am. My second job helps pay for races. And let’s face it, that’s really important to me. Seriously.

But I flat out refuse to do ANYTHING on my days off sometimes. I mean, outside of doing the laundry because if I didn’t no one would. (One time, I’ll tell you about when I went out of two for nearly a week, came home on a Sunday and my husband didn’t have any clothes because he didn’t do his own laundry. It happened.) I’ll be fair, he did vacuum yesterday.

I worked on Saturday launching an annual project at work. I’ll end up switching my day off for Tuesday, which I would have taken as a vacation day otherwise to teacher. So on weeks like this, I do a day switch that results in me having one day off in a 13 day period, because on my day off from my full-time job, I’m at my part-time job all day.

Understand? Yeah, my husband gets lost with my schedule too.

I ran eight on Saturday before work. Today I got up, showered and went to Target early. Because Target early is better, when no one is there. Also because something amazing happened at Target today.

The Shops at Target debuted. It’s like a mini boutique collection. Items from five different shops were put out today. I love it when Target gets fancy.

I score a great navy eyelet skirt for $29.99 from The Webster collection. (No photo because it’s in the washing machine since it’s a very shrinkable 100-percent cotton). 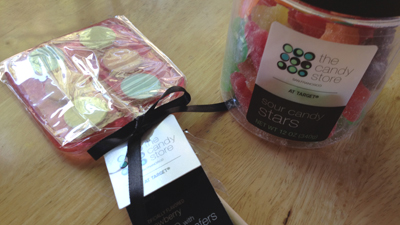 The tragedy is that the candy assorted is available in San Francisco, only about 60 miles from me. Not even a long drive considering I lived in Oakland, right across the bay, for two years.

Then I started watching Harry Potter and the Deathly Hallows. Both movies. One right after another.

I realized a couple hours ago it was time to get my run in. Usually if I wake up, take my shower and start my day, I forget the run. It’s a success when I come back to it and do it.

It was also the perfect time to test out two new items to make my left IT band, the one that rages at me (I imagine it giving me the middle finger when I run), a more happy IT band. 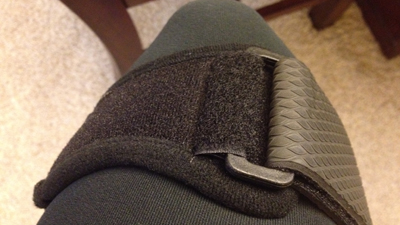 Look! My carpet isn’t a disaster! And I had to tighten that band up quite a bit to prevent it from slipping down over my Nike retro capris, which are longer than most of the capris I’ve been buying lately, a good thing if you ask me. One day I’ll write a side-by-side of the Nike retro capris and the Lululemon Run: In the Sun capris. Same premise, different execution.

I hoped on my treadmill. Which is right next to a window. Which was receiving the bulk of the sun. At nearly the hottest time of the day. Fail.

But I pushed through, watching “Don’t be Afraid of the Dark” with Katie Holmes. I’m usually not a fan of her. I became less of a fan when she married Tom Cruise. Because I’m really not a fan of him. But it was a decently scary horror movie.

I’ve been picking up the pace lately, turning the treadmill to a higher speed. So I averaged a 10:54 mile.

At 54:34 I hit five miles. And, rather than pushing it for a couple more, I decided that was enough.

Then, I tried out my second new running-related item. 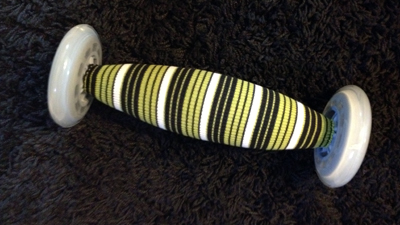 It’s the Trigger Point Quadballer. And it’s a little like Heaven.

I immediately rolled out my left IT band, which didn’t have any pain  probably thanks to the new band. It’s much firmer than the Trigger Point Grid roller that I love as well. This puts nice pressure where I need it.

Now I’m rounding out my one-day weekend by watching Netflix on the couch while waiting for clothes to dry for me to fold.

And hanging out with Beau. 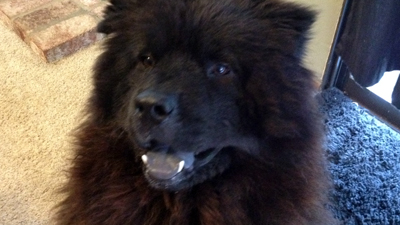 Who needs to be brushed. Pretty badly.

A good day? Yes. I know I still need to/want to run outside and not resort to my treadmill. I really want to hit the trails and sidewalks of Mountain House, but my schedule has prevented it lately.

I only have two more weeks of teaching for the semester. Then I’m planning a summer of running. Lots and lots of running. 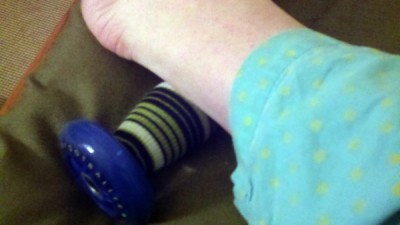 The last two weeks I’ve woken up to a very stiff right ankle/heel.

After my Achilles pull earlier this year, I’m trying not to put too much pressure on that leg. I’m giving it the rest it needs whenever I can. I’m taking rest days. But the pain is still there from time to time. When it is, I have to roll it out.

I spent a good deal of time rolling it out for the first four weeks after my injury in mid-August. I’m realizing I need some more stretching, though, as of late.

I took Monday night off my run. My Sunday/Monday running days are my only back to back ones. So if I do an extra long run on Sunday, such as my 15-miler, I am giving myself the option of taking Monday off. So I did.

It’s good I did. I noticed some gnarly bruising on my legs tonight. It’s from all the rolling I’m doing on my legs lately. It also proves to me that I need to setup a massage some time soon to help work those muscles out a little more.

So I pulled out my rollers again tonight, specifically the Trigger Point Foot and Lower Leg kit. (Mine only came with one ball, though.) 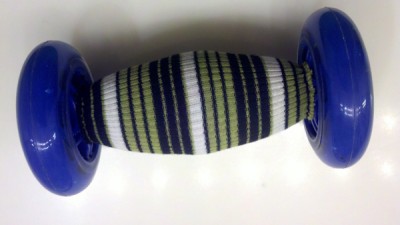 I’m spending a lot of time trying to make my legs less tight. I up my mileage and my body has moments of rebellion where it basically says “really, we’re doing this again?” Yes, yes we are.